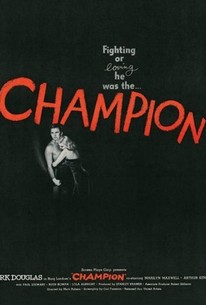 In this boxing drama, Kirk Douglas stars as Midge Kelly, a poor, ambitious boy who accidentally learns that he is a "natural" boxer. He wins his early fights with ease and eventually becomes champion of the world. Then rot sets in and almost destroys his life and career.

A tight, gripping drama worth more to the movie customer than many multi-million epics.

Frank Planer's photography has much drama as the script as it begins to tell the story right under the titles and continues compelling on its course through the grim, relentless narrative.

The Set-Up, made the same year, is infinitely superior.

Kirk Douglas does a good, aggressive job, with a slight inclination to over-eagerness at times, which might amuse an old fight fan.

The contrasting black and white cinematography perfectly fits the dark mood. The fight sequences are excitingly and realistically staged.

In his first Oscar nomination in Mark Robson's compelling melodrama, Kirk Douglas gives a ferociously realistic performance as a boxer determined to succeed at all costs.

One of the best fight films ever, also one of Kirk's best

Robson's direction is all action, wasting no time in telling this compelling story, and Carl Foreman's script is sharply observant of the boxing milieu.

Douglas is so perfect in the role that the movie is never less than gripping.

"Champion" might seem like a another predictable drama at first glance, but it's more thoughtful and darker than you'd expect, and its ending is surprisingly pessimistic. Kirk Douglas gives an imperfect but rousing performance that goes well with a respectable supporting cast, which is headed by the likes of Arthur Kennedy and Paul Stewart. "Champion" is a drama crafted by capable hands, and it's pretty well-made, too.

A taut and atmospheric classic that has long been considered one of the best boxing films ever made. It is a stark and gripping character study that concerns the rise and fall of a unscrupulous boxing champion Midge Kelly, played brilliantly by Kirk Douglas in his breakout Oscar nominated star-making performance, who began as a know-nothing beginner, but because of his underprivileged life as a youth, which has given him a persecution complex, that drives his relentless ambition, it soon makes him into a natural and fearsome boxer, who rockets to the top of his sport, to become the middleweight champion of the world, but fame and wealth quickly seduce what was already a man with serious issues to began with, he alienates and thrusts aside everyone around him, including his beloved crippled brother Connie, played impressively by Arthur Kennedy in a Oscar nominated turn and the three women in his life that he uses, than discards, wonderful played by Lola Albright, Marilyn Stewart, and Ruth Roman. His quiet, knowing manager Tommy Haley, very aptly played by Paul Stewart who helped build him up into a world class fighter, he also betrays. Kelly is such a cruel, selfish, contemptible and self-destructive bastard, that the dark and tragic ending will surprise no one, but the engrossing Oscar nominated screenplay and Douglas's powerful virtuoso performance will keep your eyes glued to the screen all the way until it reaches that end. Astute direction by Mark Robson, sharp Oscar winning editing by Harry W. Gestad, with sensational black & white cinematography by Franz Planer, which makes spectacular use of light and shadow, excellent fight scenes that are very well-staged, and realistically brutal. An outstanding melodrama which earned 6 Academy Awards including Best Actor: Kirk Douglas, Best Supporting Actor: Arthur Kennedy, Best Adapted Screenplay: Carl Foreman, Best Score: Dimitri Tiomkin, Best Editing: Harry W. Gestad. Highly Recommended.

The best boxing movie you've never heard of. Kirk Douglas is under the radar but at the top of his game.

Yeah...I enjoyed Kirk Douglas in many roles but I didn't particularly enjoy his turn as a fighter.