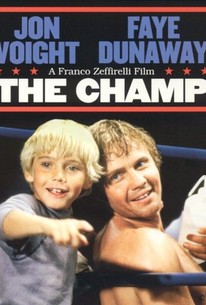 Director Franco Zeffirelli (Hamlet, Romeo and Juliet) trades in his puffy shirts for boxing gloves in this 1979 re-make of the Wallace Berry/Jackie Cooper classic. Jon Voight plays Billy Flynn, a down-on-his-luck boxer who is working as a stable man for horses in Florida. T.J. (Ricky Schroder) is his plucky son who looks after him. An unrepentant gambler and drinker, Billy needs looking after. But the father/son bond is torn asunder when Billy's upper-crust ex-wife Annie (Faye Dunaway) suddenly reappears to claim T.J. Billy realizes that the only way for him to hold on to his son is to re-enter the boxing ring and try for a comeback.

Rita Turner
as Lady at the Rail

News & Interviews for The Champ

24 Stars Who Dominated the Boxing Ring

View All The Champ News

Critic Reviews for The Champ

A three-alarm, three-hanky movie of the highest order, perfect for your kids who don't get to see many truly sad films.

The tear-jerking is so determined and persistent that your ducts feel as if they'd been worked over with a catheter.

The most offputting thing about such canny, tear-stained movies as The Champ is not their naïveté but their unholy sophistication. These movies don't mean to deal with the world as it really is, but as it should be.

...an often egregiously deliberate drama that rarely (if ever) wholeheartedly grabs the viewer's interest and attention...

A rudimentary and boring melodrama. [Full Review in Spanish]

The original film took 85 minutes, this one 121; the extra length has not improved the story.

Voight is fine as boxer on a comeback, but Ricky Schroeder steals the film. I dare you not to cry!

I admit it. I cried.

Seek out the 1931 King Vidor version.

Audience Reviews for The Champ

Effective tearjerker is peopled with fine talent, some like Joan Blondell underused, but will stop at nothing to wring those tears from the audience.

A great movie! Rick Schroder coming of age in this one. Good story plot.