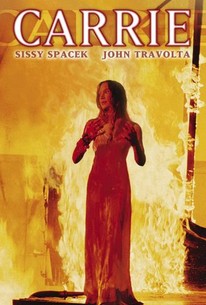 Critics Consensus: Carrie is a horrifying look at supernatural powers, high school cruelty, and teen angst -- and it brings us one of the most memorable and disturbing prom scenes in history.

Critics Consensus: Carrie is a horrifying look at supernatural powers, high school cruelty, and teen angst -- and it brings us one of the most memorable and disturbing prom scenes in history.

Critic Consensus: Carrie is a horrifying look at supernatural powers, high school cruelty, and teen angst -- and it brings us one of the most memorable and disturbing prom scenes in history.

This classic horror movie based on Stephen King's first novel stars Sissy Spacek as Carrie White, a shy, diffident teenager who is the butt of practical jokes at her small-town high school. Her blind panic at her first menstruation, a result of ignorance and religious guilt drummed into her by her fanatical mother, Margaret (Piper Laurie), only causes her classmates' vicious cruelty to escalate, despite the attentions of her overly solicitous gym teacher (Betty Buckley). Finally, when the venomous Chris Hargenson (Nancy Allen) engineers a reprehensible prank at the school prom, Carrie lashes out in a horrifying display of her heretofore minor telekinetic powers. Many films had featured school bullies, but Carrie was one of the first to focus on the special brand of cruelty unique to teenage girls. Carrie's world is presented as a snake pit, where the well-to-do female students all have fangs -- even the reticent Sue Snell (Amy Irving) -- and all the males are blind pawns, sexually twisted around the fingers of Chris and her evil cronies. The talented supporting cast includes John Travolta, P.J. Soles, and William Katt. One of the genre's true classics, the film was followed by a sequel in 1999, as well as by a famously unsuccessful Broadway musical adaptation that starred Betty Buckley, the movie's gym teacher, as Margaret White. ~ Robert Firsching, Rovi

Doug Cox
as The Beak

Edie McClurg
as Helen
View All

Carrie's climactic empowerment is all at once the tragedy and triumph of a young woman trapped between Biblical regression and a secular coming-out.

More superpowers from Brian De Palma, this time in high school, in a screen version of a Stephen King novel that's become a horror classic.

An exercise in high style that even the most unredeemably rational among moviegoers should find enormously enjoyable.

Carrie is a modest but effective shock-suspense drama about a pubescent girl, her evangelical mother and cruel schoolmates.

Brian de Palma is destined to be a great American director.

The acting takes me out of the movie. There's just some weird stuff going on here...

Still disturbing, it still creeps me out and makes me dread it. It's unsettling, incredibly brutal, and satisfying by the end.

It opens with an insidiously brilliant update of Psycho's shower scene and ends with a jump scare that Hitchcock would have envied; in between, it's merely the tenderest and most affecting movie ever made out of one of King's novels.

With a script well measured in its effects and the right cast... the film entertains. [Full Review in Spanish]

[Sissy Spacek] plays it quite straight and she is wonderful, but De Palma has shrewdly made a camp movie designed to knock them dead in the drive-ins.

De Palma surprises us with his splendid decision of making a very delicate and emotionally resonant drama from King's novel (with a magnificent direction, even if not so well edited), leaving the horror only for the tragic climactic explosion of blood and fire in the end.

From the first scene in the girl's shower (and who's watching that, huh?) Brian DePalma essentially nails Stephen King's first book, and it all seems so obvious now that a story about high school might naturally also be about horror as well. Everybody's good in this, even John ("... is the camera on me") Travolta. But Piper Laurie and Sissy Spacek shine like flash cameras on steroids, and their scenes together are as psychologically terrible as any slasher movie ever.

One of the best horror films out there to date! Although "Carrie" has a slow start and the first half is all build up, the pay-off is much more worth it than you would expect. As a teenage girl is bullied in her senior year, she discovers an odd ability she has to levitate and move certain things with her mind. It's less of a jerky horror flick than a bone-chilling creepy one. I felt myself gulping by the end of the film at how eerie they were able to pull off her abilities and how many symbolic moments came from this film. It may not have all the tense moments you want, but the last 25 minutes will absolutely blow your mind. The camera techniques are very questionable, but commendable, the editing is done perfectly, and this film could not have been directed better. "Carrie" is one of those rare treats that doesn't come around very often! Its terrific!

I tend to remain largely unaffected by most horror films, but "Carrie" (while not quite 'scary') manages to be consistently creepy in that mysterious, unsettling sort of way. It's a triumph of suspenseful storytelling as well as a strange commentary on youth that still feels shockingly relevant today.