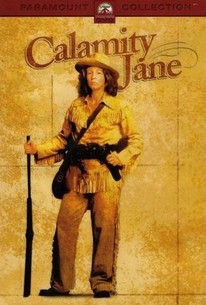 19th century frontierwoman Martha Jane Canary (1852-1903)--better known as Calamity Jane--has been portrayed by actresses as diverse as Doris Day, Jean Arthur and Louise Dresser. Jane Alexander isn't exactly the living image of the legendary Jane, but at least she plays down the Hollywood glamour that afflicted Arthur's and Day's interpretations. This made-for-TV film details the private Jane rather than the public image. It was based on letters sent by Jane to her daughter back east; Suzanne Clauser's teleplay opines that the daughter was the illegitimate offspring of Calamity and her paramour Wild Bill Hickok (Frederic Forrest). Calamity Jane originally aired March 6, 1984.

Walter Olkewicz
as Will Lull

There are no critic reviews yet for Calamity Jane. Keep checking Rotten Tomatoes for updates!

There are no featured audience reviews yet. Click the link below to see what others say about Calamity Jane!