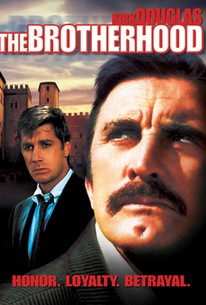 A gangster and his younger brother have a difference of opinion on their approach to their involvement in organized crime. Frank (Kirk Douglas) is the old school mafioso who tries to control the impulses of his impatient younger brother Vince (Alex Cord). Vince oversteps his territory by beating his brother in a move to control modern electronic concerns. Frank goes against the plan causing Vince's father-in-law Domemic Bertolo (Luther Adler ) to plan his ouster. Mafia head Don Peppino (Eduardo Cianelli) confides in Frank that it was Domenic who started the last mob war that killed his father. Vince is given orders to kill Frank, but Frank plants the traditional kiss of death on Vince before going after the scheming Bertolo. Irene Pappas is Frank's wife Ida. Susan Strasberg, Murray Hamilton and Joe De Santis also star in this well made mobster movie.

Critic Reviews for The Brotherhood

[Director Martin] Ritt can do very little with the breast-beating which attends this tale of brotherly love and self-sacrifice.

The Brotherhood has an old-fashioned, beautiful energy about it.

If this story of the Mafia seems near bankruptcy, it's because nearly everything in it is in debt to something else that was done better at another time.

Godfather-like saga has its moments.

The acting is memorable throughout - Douglas characteristically tense, Cord perfect as the smoother sibling and Adler menacing as the boss.

Audience Reviews for The Brotherhood

I don't know why but I expected to like The Brotherhood from the start so I was disappointed when I didn't.It was OK I guess but it wasn't as good as I was hoping it would be.Maybe it was because Kurt Douglas was playing a gangster that I thought I would like this movie.It's nothing I'd recommend, Just something to watch