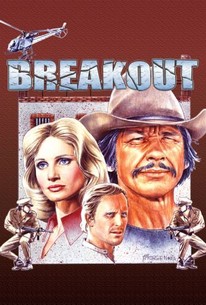 The star-director team of Charles Bronson and Tom Gries (Breakheart Pass) combine their efforts again on Breakout. Bronson plays Nick Colton, a reckless pilot who heads to an unnamed South American country, in hopes of rescuing imprisoned Jay Wagner (Robert Duvall). Villain Harris Wagner (John Huston), who has framed Jay, has an unlimited supply of henchmen at his disposal, but they're no match for the dauntless Colton. Jill Ireland, Bronson's real-life wife, costars as Duvall's missus.

Emilio Fernandez
as The Warden
View All

I'd have liked Breakout more, I think, if it had been done as a flat-out thriller without the added touches.

This is only the improbable beginning.

...it's Bronson's performance that keeps things interesting even during some of the more superfluous sequences...

Should've been called Charles Bronson and friends. Chuck, Robert Duvall, Randy Quaid, John Huston and, of course, Jill Ireland star in this really fun flick where Bronson plays a fast talking, con-man, airplane pilot hired by Ireland to break out her husband from prison. Along with seeing Bronson in a fun role this is well worth seeing just for a splatterific scene straight out of Braindead (or Raiders of the Lost Ark for the strong stomached). After watching this I think the Russell Crowe, Meg Ryan flick Proof of Life (which I also enjoyed, gotta love David Morse and Caruso) should've been credited as a remake.