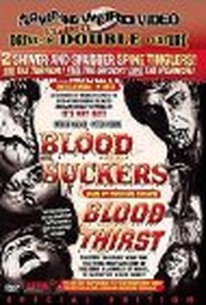 This badly-dated but interesting variant on the vampire subgenre is loosely based on the Simon Raven novel Doctors Wear Scarlet. The story details the seduction of an Oxford resident (Patrick Mower) into a satanic vampire society while studying in Greece. The chief twist here is that vampirism is treated not as a supernatural affliction, but as a bizarre form of sexual gratification -- an alternative lifestyle in which Mower is soon immersed, thanks to the manipulations of an exotic Greek siren. After some silly scenes featuring a lot of groovin' hippie orgies and silly psychedelic lighting effects, Mower returns to England to continue his sanguinary obsession in earnest, focusing his bloodthirsty desires on his prudish fiancee -- who is not so willing to embrace this new lifestyle. Despite the aforementioned painful attempts at hipness, this film shapes up to be an effective thriller -- perhaps the first to put a psychological spin on the vampire pantheon. Peter Cushing and Patrick Macnee are on hand in very small but effective supporting roles. Released also under the more "trendy" title Incense for the Damned. ~ Cavett Binion, Rovi

There are no critic reviews yet for Incense for the Damned (Bloodsuckers)(Doctors Wear Scarlet)(Freedom Seekers). Keep checking Rotten Tomatoes for updates!

I saw this as a fan of Cushing, and was disappointed, he has an extremely small role. The movie is also very slow and boring, and we don't get to know much about the characters either. And it's supposed to be about vampires, but it's not about them hardly at all.