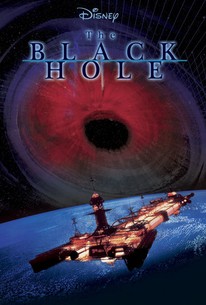 Critics Consensus: While lavishly crafted and brimming with ambitious ideas, The Black Hole probes the depths of space with an unexciting story and hokey melodrama.

Critic Consensus: While lavishly crafted and brimming with ambitious ideas, The Black Hole probes the depths of space with an unexciting story and hokey melodrama.

An obsessed scientist drives to maneuver his space craft directly into a black hole in hopes of discovering the secrets of the Universe. This special-effects-driven science-fiction film focuses on the dilemma of a group of fellow space travelers, who accidentally discover the scientist's insane plan.

Slim Pickens
as Bob
View All

News & Interviews for The Black Hole

View All The Black Hole News

Critic Reviews for The Black Hole

It is good to see the Disney craftsmen doing what they do best on such a grand and risky scale. If one has time for only one space opera this season, this is the one to choose.

Disney's most ambitious and costly production to date -- about a spaceship crew which encounters a Black Hole and a long-lost madman -- and if looks were everything, you could hardly fault it.

It cost half as much as Star Trek and looks better -- not as lavish, perhaps, but more original. The special effects are fancy, and the design even more so.

Takes us all the way to the rim of space only to bog us down in a talky melodrama whipped up out of mad scientists and haunted houses.

The Black Hole may look like 20 million bucks, but its scenario is worth about 20 cents.

The end result of this recipe -- cooked with very little conviction, but with a generous budget -- is one more chapter in a story that has been told before. [Full Review in Spanish]

No matter what its story means to tell us about the sterility of science and the tyranny of the computer, The Black Hole is executed with such impersonal craftsmanship that it ends up on the side of the machines.

Despite Oscar nominations for cinematography and visual effects, the Black Hole, an attempt to cash in on the sucess of Star Wars, leaves much to be desired.

The problem...is that the protagonist, Schell, is nuts, and we find it difficult to root for him. The other characters are never fully developed, and so the picture becomes a triumph of style over substance.

Is let down by the weak script.

The science of this fiction is as hokey as the drama, but the imaginative art design and excellent special effects are magnificent.

Audience Reviews for The Black Hole

I saw this movie when I was a kid and I found it profoundly boring. It's another of the Star Wars wannabees, this one's from Disney too. I didn't care for it, but I may give it another try someday.

Sure, it isn't all that amazing if you pit it up against Star Wars (which everyone seemed to do), but this is more of a pure sci-fi movie anyway. It doesn't get much more hardcore than a movie about black holes and their purpose. Of course Robert Forster steals the show as the too cool for school captain and you have to love Maxamillion the robot with spinning swords of doom. Visually, this is pretty interesting. It's not too flashy, but really has the realistic backdrops when they count. This movie's only real flaw is being too short and not covering more post black hole. With that said, it is really fun and a largely unseen yet important sci-fi movie.