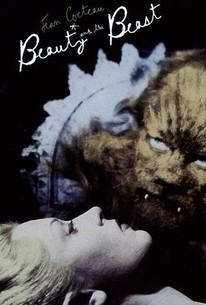 Critics Consensus: With its magical optical effects and enchanting performances, Jean Cocteau's Beauty and the Beast remains the most surreal -- and soulful -- of the fairy tale's film adaptations.

Critics Consensus: With its magical optical effects and enchanting performances, Jean Cocteau's Beauty and the Beast remains the most surreal -- and soulful -- of the fairy tale's film adaptations.

Critic Consensus: With its magical optical effects and enchanting performances, Jean Cocteau's Beauty and the Beast remains the most surreal -- and soulful -- of the fairy tale's film adaptations.

Jean Cocteau's adaptation of Beauty and the Beast (originally released in France as La Belle et la Bte) stars Josette Day as Beauty and Jean Marais as the Beast. When a merchant (Marcel Andr (C)) is told that he must die for picking a rose from the Beast's garden, his courageous daughter (Day) offers to go back to the Beast in her father's place. The Beast falls in love with her and proposes marriage on a nightly basis; she refuses, having pledged her troth to a handsome prince (also played by Marais). Eventually, however, she is drawn to the repellent but strangely fascinating Beast, who tests her fidelity by giving her a key, telling her that if she doesn't return it to him by a specific time, he will die of grief. The film features a musical score by Georges Auric. ~ Hal Erickson, Rovi

Jean Marais
as The Beast/Avenant

Raoul Marco
as The Usurer

What's mesmerising about Cocteau's film is the seriousness with which it regards the fairytale material, combined with an eerie, dreamlike production design that's more effective precisely because it's more real.

"Beauty and the Beast" remains a profound exploration of the human and animal worlds, light and darkness, and love and art.

Beauty is fragile. Magic is rare. And it's precisely the blessing of the cinema that it affords us such opportunities to indulge in fantasy.

If the first act of La Belle et la Bête showcases familial insecurity in all its ferociousness, the second part, which actually involves a monster, is amazingly peaceful, full of surrealist cinema tricks and haunting mise-en-scene.

Children, as well as adults, may find the atmosphere dangerously addictive.

When bodies appear through walls or fly up into the air, it is almost as if Cocteau's camera has miraculously recorded a dream.

It's a mesmerizing experience of the highest order, hitting on every emotional beat and nailing every visual trick.

One of the most beautiful and brooding films ever made.

Cocteau's enduring fable remains just as enchanting and charming as it ever was.

Adults and children alike will still easily be swept up in the bizarre and extravagant spectacle of this gothic romantic fantasy.

It's the style with which Cocteau brings his fairy tale realm to life that makes this film stand the test of time.

More exquisite than ever thanks to a 4K restoration, Jean Cocteau's dreamy 1946 black-and-white retelling of Beauty And The Beast is a real spellbinder.

An enchanting film that surprises us with its magical atmosphere and dazzling visual effects, even if the plot can be a bit repetitive and contrived when focusing on the development of the characters' relationship, leading to an end that is not as satisfying as it should be.

Fresh on the heels of WWll, Jean Cocteau's elegant fantasy is disguised as a treat for children perhaps but is more squarely aimed at adults and asks for a bit of a return to innocence after the terror of the war. Decidedly French (one oaf of a suitor slaps a woman and there is no response to the act), the film is slow for modern tastes, without CGI obviously, and yet it's languor is seductive, designed to draw us closer to the heart of a film that seeks to embrace us in its magic. And there's plenty of that on hand here.

La Belle et la Bête is poetry captured on film. The haunting effects of Bête's castle furnishings are alone worth the price of admission (or DVD rental). Visually, the entire picture is stunning. A beautiful work of art.

Jean Cocteau's masterpiece, La Belle et la bete, is one of the most perfect fantasy films ever made. Not only is it incredibly well-shot (with not just static camera shots but some frantic back and forth shots between characters), but it's also very well-made. The beast's make-up, for instance, still holds up all these years later. Josette Day is absolutely gorgeous and wonderful as Beauty, and a great foil to the beast's persona. There are some great old school special effects and camera tricks to make the story work, as well as some classic filmmaking errors. For instance, in one scene, the boom mic is in shot for a lengthy period of time before it goes out of the frame. It's a mistake that apparently Cocteau wasn't worried about, and I find that incredibly validating to the film itself. It's so good that even mistakes can't affect its power. Absolutely wonderful from beginning to end.