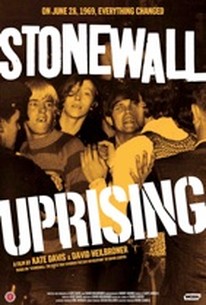 "It was the Rosa Parks moment," says one man. June 28, 1969: NYC police raid a Greenwich Village Mafia-run gay bar, The Stonewall Inn. For the first time, patrons refuse to be led into paddy wagons, setting off a 3-day riot that launches the Gay Rights Movement. Told by Stonewall patrons, Village Voice reporters and the cop who led the raid, STONEWALL UPRISING compellingly recalls the bad old days when psychoanalysts equated homosexuality with mental illness and advised aversion therapy, and even lobotomies; public service announcements warned youngsters against predatory homosexuals; and police entrapment was rampant. A treasure-trove of archival footage gives life to this all-too-recent reality, a time when Mike Wallace announced on a 1966 CBS Reports: "The average homosexual, if there be such, is promiscuous. He is not interested in, nor capable of, a lasting relationship like that of a heterosexual marriage." At the height of this oppression, the cops raid Stonewall, triggering nights of pandemonium with tear gas, billy clubs and a small army of tactical police. The rest is history. -- (C) First Run Features

For a movie about a groundbreaking gay rebellion, Stonewall Uprising plays it much too straight.

It comes alive through the memories of those who were there.

On the one hand, Stonewall Uprising shows how far we've come toward enlightenment and tolerance since that hot June night. On the other, it reminds us that there are still many minds to change and rights to win.

Pplaces the incident within the context of the Civil Rights struggles of the 1960s with PBS-caliber tact and compassion.

Stonewall Uprising is an important documentary -- and a passionate and compassionate reconstruction of the historic standoff between police and pubcrawlers.

Fascinating doc provides the story of this pivotal moment in gay rights.

Shines a light on a struggle that continues to this day, and does so in a gripping , inspiring fashion.

Among the year's best non-fiction features.

At moments it transcends its sometimes fuzzy construction and the spark that ignited a revolution becomes tremendously palpable and galvanizing.

Richard Knight
Knight at the Movies

Includes frank recollections and startling clips from vintage news reports, including 'The Homosexuals,' a 1967 CBS special narrated by Dan Rather that characterized homosexuality as 'a mental illness that has reached epidemiological proportions.'

Excellent source of information for those who know little of this monumental occurrence, but for those with no need for a Stonewall riots 101, it has little to offer.

More than half of the documentary isn't about Stonewall at all, which makes for a frustrating 49-minute wait until the uprising begins to rise up.

Most of it is familiar territory, but its nice to hear people who were there retell their story about what it was like rather than just a bunch of historians discussing its significance. We know it was the turning point, but to listen to gay men and women describe how and why they were pushed to the breaking point is pretty interesting.