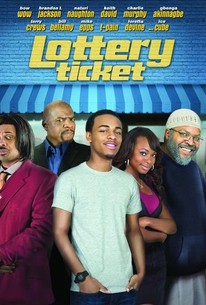 Critics Consensus: There's a worthwhile message at the heart of Lottery Ticket, but it's buried under stale humor, tired stereotypes, and obvious clichés.

Critics Consensus: There's a worthwhile message at the heart of Lottery Ticket, but it's buried under stale humor, tired stereotypes, and obvious clichés.

Critic Consensus: There's a worthwhile message at the heart of Lottery Ticket, but it's buried under stale humor, tired stereotypes, and obvious clichés.

A kid from the projects scores the jackpot in the lottery and fights to protect his ticket over the course of a treacherous holiday weekend in this all-star comedy featuring Ice Cube, Charlie Murphy, Terry Crews, and Loretta Devine. With the Fourth of July fast approaching, Kevin Carson (Bow Wow) purchases a pair of lottery tickets and settles down in front of the television to catch the winning numbers. When Kevin realizes he's just won 370 million dollars, he knows his neighbors will all come knocking the moment word of his massive windfall gets out. And he's right, too; before long, the local thugs are looking to take the ticket by force, and the sexiest girls in the neighborhood are begging to bear his children. Unfortunately for Kevin and his grandma, the lottery-claims office doesn't open until Monday, and over the next 72 hours there are more than a million ways the winning ticket could fall into the wrong hands.

Terry Crews
as Jimmy the Driver

Danielle Lewis
as Voice in the Crowd

No doubt the characters are stereotypes, but the performances are handled with a knowing wink and a great deal of fun.

There are enough stereotypes in here to get Dr. Laura frothing at the mouth -- and enough menace to merit co-writing credit for the Hughes brothers.

It all comes off a bit like an extended episode of "Everybody Hates Chris" with really bad language.

Let's call it four out of six numbers, with no power bonus. Some payoff, but don't quit your job.

...a film that's largely wealthy in incoherence, raising a smile one minute and a cringe the next, until it finally devolves into a 'who-cares' cliché-fest.

A jumble of comedy and drama with a sprinkling of After School Special messaging and some head-scratchingly bad choices.

A tasteless and obnoxious "comedy," "Lottery Ticket" is easily one of the year's worst films.

Lottery Ticket is generally harmless; too slight to hold-up the more serious themes it is thinking about, but too well-meaning to be out-and-out insulting.

The cast is terrific and the basic premise is pleasing, but a wavering tone robs Lottery Ticket of some of its power.

...shallow, clichéd, sentimental, and derivative; but the cast makes up for the plot's deficiencies with an amiable charm that's hard to resist.

If given the opportunity to see Lottery Ticket again (once was enough!), I'd break down... and buy some lottery tickets instead.

Very predictable, and pretty generic. But the movie has a few very funny one-liners, and a pretty good performance by Bow Wow. Not the best out there, but I've seen comedies that are a lot worse than this for sure.

A very unfunny and boring movie. It was an interesting concept but a bad execution. I only laughed 3 times the whole movie. D

Moral: "Money Doesn't Change You, It Changes the People Around You!" It was entertaining and fun, not alot of comedy involved but it was a good movie. Kevin Carson is a young man living in the projects who has to survive a three-day weekend after his opportunistic neighbors find out he's holding a winning lottery ticket worth $350 million.

Lottery Ticket has wit, heart, a cool story, and a lot of emotion. This film is about a regular kid from the poor town in the projects who wins the lottery and just wants to make his town a better place, but when greed and girls come into his life he gets sidetracked. His ticket is stolen and he has to get it back before he loses it to the biggest jackass in the town. It seems like a basic story, and that is okay, because they do the absolute best they can with what they have to work with here. The Lottery Ticket is a fun entertaining movie that is surprisingly worth seeing!