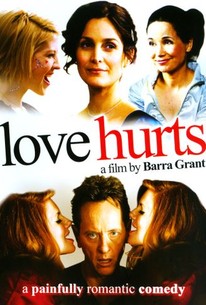 A complacent, middle-aged ear, nose, and throat doctor attempts to win back his wayward wife with a little help from their college-bound son in this romantic comedy from writer/director Barra Grant (Glory Days, Life of the Party). Dr. Ben Bingham (Richard E. Grant) has everything a man his age could want in life -- a good job, a gorgeous home, and a beautiful wife -- yet, as a result of being so content, he's lost his passion for living. His wife, Amanda (Carrie-Anne Moss), on the other hand, is excited to start a new phase in her life once their teenage son, Justin (Johnny Pacar), leaves for college. Unfortunately, she sees Ben as dead weight, and decides to walk out on the marriage before he drags her down, too. With Amanda gone, Ben sinks into a deep depression, slipping into his pajamas for weeks on end and numbing his sorrows in gallons of booze. Disturbed by his father's increasingly morose behavior, Justin give his dad a makeover and encourages him to go out on the town. Before long, every single woman has her eyes on Ben. But there's only one woman he wants, and in order to get her back he'll have to convince her that he has a new outlook on life. When teenage player Justin falls hard for a virtuous Russian ballerina, Ben returns the favor by schooling him in the fine art of romance. In the process, Ben realizes just what Amanda means to him, and vows to do whatever it takes to win her back.

Yvonne Zima
as Andrea
View All

Moss brings warmth and dignity to a part that could've easily slid into stereotype, while Camryn Manheim owns her few scenes as Amanda's best friend.

There's a perfectly likable, sitcomish romantic comedy buried somewhere deep inside Barra Grant's indie Love Hurts, but it would have taken some very significant rewrites to unearth it.

A flat-footed sitcom with unconvincing situations and comedy.

...an utterly misbegotten piece of work...

This is not muddy storytelling, just bipolar and unconvincing, as Grant force-feeds us comedy to soften us up for the emotional kill.

It's bloodless material, sluggishly captured by Barra, who's trapped in directorial survival mode, terrified to color outside of the lines.

The direction rarely rises above acceptable, but anytime the camera's pointed at Grant, it doesn't matter.

I thought this movie was rather enjoyable, and sweet. I loved the relationship the son had with his parents. I found that extremely endearing. Nice movie that isn't a blockbuster for most, but for me it was a nice afternoon couch movie...