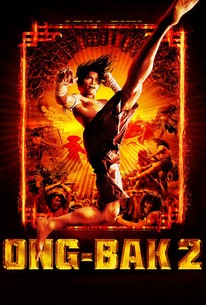 Critics Consensus: It suffers from comparisons to its predecessor -- not to mention Tony Jaa's less-than-nimble direction -- but Ong Bak 2 has all the extravagant violence and playful style that fans of the original will expect.

Critics Consensus: It suffers from comparisons to its predecessor -- not to mention Tony Jaa's less-than-nimble direction -- but Ong Bak 2 has all the extravagant violence and playful style that fans of the original will expect.

Critic Consensus: It suffers from comparisons to its predecessor -- not to mention Tony Jaa's less-than-nimble direction -- but Ong Bak 2 has all the extravagant violence and playful style that fans of the original will expect.

Muay Thai martial arts master Tony Jaa returns to deliver a bone-breaking barrage of knees and elbows in this action opus that finds the star not only delivering blows in front of the camera, but calling the shots behind it as well. Despite the title's indication of this film as a sequel to 2003's Ong-Bak: The Thai Warrior, this movie has no narrative connection to the events of the earlier work, despite the fact that both films star Jaa.

Jaa, who co-directs, has only one thing in mind: a series of increasingly complex fight scenes in his characteristically wide-ranging style. If movie theaters allowed you to fast-forward past the filler, your life just might be complete.

Bears virtually no connection to the original.

Taking co-directorial reins with Panna Rittikrai, Jaa has erected a portentous platform for his high-flying athleticism, bearing none of the freewheeling spirit or humor that made his feature debut a guiltless pleasure.

There isn't much of a plot, although Jaa's fans won't mind a bit. All they want is lots of bloody, muddy action in the Thai jungles, which they get.

Tony Jaa is a lot of fun to watch, but Ong Bak 2: The Beginning is not only a step back in time -- to 1431 -- but a step back in this martial artist's international film career.

It was epic action, I will admit, but that doesn't mean that the writers should give up on the rest of the film completely.

Let me be blunt - Ong Bak 2 is an incoherent mess...[Yet is] awesome, stupid, incoherent fun.

A mix of martial arts, which includes Muay Thai, kung fu and Samurai swordplay, that was Jaa's inspiration for making the movie in the first place.

The 'sequel' to Jaa's stunning international debut, Ong-Bak, and his third international outing after the entertaining The Protector, but it contains only a fraction of the previous two's joyful invention.

... the lack of any dramatic center leaves the action, for all its bloody carnage and brutality, emotionally untethered: all spectacle and no character.

Though better made than the first movie (even avoiding those annoying playbacks), what is obvious is its purely commercial interest, from the title (this is not a sequel or a prequel) to the use of flashbacks so that the movie can jump straight to the action - and the ending is terrible.

What can I say about this sequel, its actually very good surprisingly, nice idea and well made. Lets just get this straight, this sequel has nothing to do with the original film a tall but its just as good if not a little better than the original film. This film is set in feudal Siam with a young boy (Jaa) being raised by a group of elite warrior bandits after his parents have been killed and he was captured by slave traders. So again the plot is very basic and revolves around revenge as usual, the film also tends to show Jaa doing his thing all over again accept this time set in ancient times and this time it looks even better. The various forms of martial arts on display whilst a young Jaa trains and throughout the film is superb, a real MMA film straight out of the wild East. The action sequences are a joy to watch with flashes of colour, blood, fantasy and legend fused with various forms of combat, this film really does put some major Hollywood action films to shame. Everyone and everything looks highly realistic from sets, hair styles and costumes to weapons and the beautiful locations in native Thailand. Really strong start to the film with a good intro of the warrior assassins but admittedly the film does lose its powerful grip near the end with its rather odd ending due to problems on set during the making. A glorious mystical feel runs through this film combining genuine history with a lovely dash of artistic license :)

A brilliant and spectacular martial arts epic that totally blows you away. Tony Jaa tears up the screen once again in the leading role and behind the camera crafting a bold, ferocious and earth-shattering adventure. It's packed with some the most amazing and depth-defying action sequences ever put on film and has one of the greatest final martial arts sequences ever put on film. An incredible and near perfect film. A dazzling and pule-pounding action-packed extravaganza that roars across the screen.

The young son of a general assassinated during a coup is taken in by a band of warrior thieves and learns the way of martial arts to seek his revenge. The original Ong Bak was a frenetic martial arts fest with little plot to back it up but shored up by the impressive athletic skill of its star Tony Jaa, and this sequel doesn't stray too far from that formula. The medieval setting means that some equally impressive swordplay can be thrown into the mix and both the opening and final action sequences are very impressive indeed. Unfortunately the only filling to this flurry of limbs and blades is the usual "you killed my mum and dad and have taken a fancy to my bird" flashback and the plot and characterisation goes literally no further than that. It's a very pretty film having some attractive costume design, beautiful locations and pleasing cinematography and I'm sure that it looks superb for the trailers; but that's all it is. A 90 minute long trailer. Add the fact that the "ending" is basically a two line voice over featuring the most feeble and tenuous link to the original film I have EVER witnessed in a sequel it's only entertaining on the most superficial of levels.