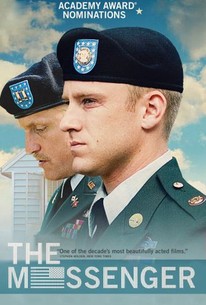 Critics Consensus: A dark but timely subject is handled deftly by writer/directer Owen Moverman and superbly acted by Woody Harrleson and Ben Foster.

Critics Consensus: A dark but timely subject is handled deftly by writer/directer Owen Moverman and superbly acted by Woody Harrleson and Ben Foster.

Critic Consensus: A dark but timely subject is handled deftly by writer/directer Owen Moverman and superbly acted by Woody Harrleson and Ben Foster.

An Iraq War veteran who just narrowly escaped death in combat struggles with his new post at the Casualty Notification Office while anticipating his upcoming discharge in this military drama starring Ben Foster, Woody Harrelson, Jena Malone, and Samantha Morton. Will Montgomery (Foster) has spent his fair share of time in army hospitals, and with just three months to go before returning to civilian life, he discovers that his girlfriend back home (Malone) has decided to move on with her life. Crestfallen, Will discovers that his latest hope for a fresh start will be training to work for the Casualty Notification Office under the mentorship of senior officer Tony (Harrelson). As someone who had a close brush with death himself, Will isn't sure that he's the man to tell families that their own loved ones will never be coming home. Thankfully, in between his assignments, Tony offers a sympathetic ear and the two men form a bond that will ultimately help them to readjust to "normal" life. But once you've been in the thick of it, any true hope for a "normal" life after the military is just wishful thinking. Later, Will is drawn to the grieving widow (Morton) of a fallen soldier, a development that forces him to ponder the ethical dilemma of starting a relationship with a woman in such a vulnerable position. ~ Jason Buchanan, Rovi

News & Interviews for The Messenger

View All The Messenger News

Critic Reviews for The Messenger

An extraordinary anti-war film that does not engage in polemics. The Messenger's extreme effectiveness is due to the brilliant acting of Ben Foster and Woody Harrelson.

An intelligent and well-acted film which deserves its outing here.

It's a film of quietly assured dramatic clout, a strong and sober reckoning with American conscience.

Stumbles a little, loosening its grip in the bromantic final stretch. But if impenitent heartstring pluckage is what you're after, this is where it's at.

The Oscar-nominated script pursues a grimly honourable task into its grim and not always honourable byways.

Foster dazzles as a young man defusing the rage within.

The Messenger is authentic and artful, and unpretentious but philosophical, in its approach to difficult material.

The Messenger is seeded with unspoken truth, resulting in a dramatic tour de force film with an enlightening and uplifting script, focusing on the fragility and resiliency of the human condition.

Thoughtfully dissects the overarching consequences of that unfortunate conflict.

One of the most powerful and humane war dramas to spring from this current conflict.

It is relentlessly bleak, even in its lighter moments. The downbeat tone is wearying. These days, we just need some hope.

Audience Reviews for The Messenger

A decent character study whose main strength lies in two great performances by Foster and Harrelson, who shine in a sad story that deals with the psychological consequences of a terrible job, but the film also suffers from some tiresome pacing and unnecessary scenes.

We've seen countless war films about the battlefield, filled with graphic and shocking images that depict war as the ultimate hell on earth. Some of those films (Saving Private Ryan, Platoon) are incredible while others (Windtalkers, Pearl Harbor) are not. The Messenger is a film that doesn't concern itself with the battlefield. It is about the aftermath, when soldiers are employed to visit the families of those killed in action and give them the horrible news. It is an undoubtedly gripping picture, filled with moments of mourning, sadness, and insanity. The story is ultimately about grief that never goes away but has to nonetheless be overcome. Ben Foster, Woody Harrelson, and Samantha Morton give career defining performances. This film is an absolute masterpiece that portrays the "war is hell" theme in a way that truly has never been seen before in film.

More often than not, when a film that is a wartime drama gets released, it usually focuses on the battlefield, and the horrors of war. Not all, but many. This is one of the few that focuses on what hapens after all that, when the news that no one wants comes, and the men who are assigned to deliver it. Sometimes sad, sometimes bitter, sometimes even a bit funny, but definitely real, this is an excellent docudrama about Staff Sgt. Will Montgomery- a wounded veteran home from Iraq with three months left until his service is up. To finish out his time he is assigned to the Casualty Notification Office where he is sent out under the guidance of senior officer Capt. Tony Stone to notify family members of the deaths of their loved ones. The film focuses on this painful but necessary part of life, as well as the effect it has on both men, each with their own set of issues and the various ways they try to cope with them. At times this can be a very gut and heart wrenching film, and really awkward and uncomfortable, but it is presented in a respectful manner with characters that are very well developed and interesting. The script is very sharp, and the direction, as I said, gives it a feeling of realism that can be hard to endure, but never exploitative. Ben Foster once again proves he is a really talented person to watch, and he gives a fantastic performance filled with pain, emotion, and sympathy. Woody Harrelson shows that he can be brilliant no matter the size of the part he plays, or how much screen time he has. He brings an effective sense of weariness and experience to things. He and Foster have great chemistry together, and I'd love to see them work together again. Samantha Morton (whom I didn't recognize at first) is amazing as a widow who develops an odd rapport with Foster's character after he informs her that her husband has been killed overseas. Jena Malone takes what could have been a one note role ( Will's girlfriend who can't handle being with him anymore so she leaves him) and gives it more depth and substance. Steve Buscemi shines as one of several characters (like Morton's) who receive a visit from Stone and Montgomery and deals with it in a way that is very memorable and moving. This film avoids dealing with politics and the validity of war, and instead focuses on the people. It's a very moving indie drama that, as the directorial debut of screenwriter Oren Moverman, could be the start of a very great career for him as something other than a writer.You should definitely give this film a watch. It's quite compelling and kept me interested the whole way through.

Captain Tony Stone: I know what you're thinkin'. You're thinkin' shit, I'm a goddamn decorated war hero with three months left to serve, and they draft me into the angels-of-death squadron. I get a beeper, a canned speech, and a lunatic commanding officer to serve a fuckin' ocean of grief. Am I right?  The Messenger is a powerful piece of filmmaking. It never goes over the top with all the sadness that is in the movie. There's never that scene we are accustomed to seeing in lesser movies, where there's a sad score in the background when we are shown tearjerking material. Instead this film remains quiet in the sadness. We follow two army messengers that tell families of their loved ones death. The commanding officer, Stone, is by the book. He wants to go in, tell them, and get out. There's to be no touching of the next of kin. Will is a war hero who has three months left to serve, and is assigned to the job. The movie gives us these two characters whose personalities differ. Watching Woody Harrelson and Ben Foster in these roles is something special.  Harrelson and Foster have great chemistry on screen together, both give amazing performances, and go a long way in making the movie the powerful film it is. Harrelson is a favorite of mine, and we gives a really good performance, like the one here, it is an amazing thing to watch. Foster reminded me a lot of Sean Penn in this movie. I haven't seen to much of him, but he definitely shows that he is an extremely good actor with his work here. What makes this movie the amazing achievement it is though is the direction of Oren Moverman. He doesn't give in to the typical sentimentality and melodrama. He gives us scenes that are sad, but he doesn't try to force us to cry. The material is sad enough in its own right; so he knows that anything else is overkill. The situations the messengers walk into differ greatly. Sometimes their hated, sometimes their respected, and other times they are just their while the family grieves. All of these situations are handled greatly by Moverman, Harrelson, and Foster.  A war film unlike any I have ever seen. It isn't about the actual war, but the toll of the war on the home front. It's sadder and more meaningful then showing the viewer how the kids die, by blowing them up on screen. The point isn't to see how they die, but how their death is handled at home. When a soldier dies that is not the end, as they have family and friends at home who then have to fight a war with grief. The Messenger does an incredible job showing us that.