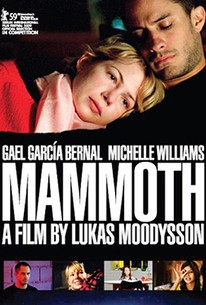 Critics Consensus: While it features a sterling cast, Mammoth's elephantine scope is too sprawling for it to maintain dramatic focus.

Critics Consensus: While it features a sterling cast, Mammoth's elephantine scope is too sprawling for it to maintain dramatic focus.

Critic Consensus: While it features a sterling cast, Mammoth's elephantine scope is too sprawling for it to maintain dramatic focus.

Three years after his "experimental" phase wrapped with the jarring, iconoclastic Container, Swedish enfant terrible Lukas Moodysson returned for this sprawling, ambitious social drama. Echoing Alejandro González Iñárritu's Babel and featuring two Hollywood A-listers as his leads, Mammoth also marked the director's premier English-language project. Michelle Williams and Gael García Bernal co-star as Ellen and Leo, New York marrieds; she's an emergency-room surgeon, he's a listless, vaguely dissatisfied Internet game designer. They have a family, albeit an unconventional and dysfunctional one: seven-year-old daughter Jackie (Sophie Nyweide) is practically being raised by a 24/7 Filipino caregiver, Gloria (Marife Necesito), who dotes on her incessantly. This provokes the envy of Ellen and the resentment of Gloria's two geographically estranged sons, Manuel (Martin Delos Santos) and Salvador (Jan Nicdao), who repeatedly phone their mom from Manila and plead with her to come home. Gloria's mother grows so distressed by this behavior that she attempts to show Salvador just how easy his life is in comparison to that of others, which leads to unanticipated tragic consequences. Meanwhile, Leo teams up with a shifty associate, Bob (Tom McCarthy), flies to Thailand, and encounters a freewheeling, laid-back working mother named Cookie (Run Srinikornchot). Step by step, the actions that Leo takes while abroad create a domino effect and alter everyone's lives in irreversible ways.

Ofelia B. Ruivivar
as Sari salesperson
View All

This is the Mike Leigh paradis terrestre, as good as it gets.

[A] Babel-ish drama about the malaises wrought by globalisation, how we're closer than ever, and yet, if I'm not mistaken, farther apart. Unfortunately, you've seen it already.

Mammoth is a masterclass in feel-bad cinema.

As woolly and elephantine as its title.

An interesting idea, but Mammoth's good intentions -- like its characters' -- are lost somewhere in the delivery.

A film neither willfully difficult nor easily accessible, conjuring an illusion of vapidness that may be rather too convincing for some audiences.

The film's depiction of capitalism's erosion of the family unit is so heavy-handed that any emotional or affecting moments are undermined by the transparency of Moodysson's intentions.

The real trouble with Mammoth is that [Lukas] Moodysson, more practiced in subtlety than he's given credit for, exhibits none here.

Having spent a decade purposefully alienating audiences, Swedish writer/director Lukas Moodysson claws his way back into the mainstream with this condescending, glossy slice of We Are The World-style film-making.

Mammoth looks sleek and is well-acted but the preachy tone is hard to bear.

There's nothing intrinsically wrong with message movies like this provided the characters feel real (they don't) and it's handled with a light touch (it isn't).

Good movie. Have been seeing this going cheap on Blu ray for a while now. Was tempted to buy it, but glad I watched it on tv instead, as I don't know that it is a movie I would want to watch again. (though I did like it). It's pretty much a movie about unhappy people. I could see what they were aiming for with the parallels. Ie, Michelle Williams plays a working mum who doesn't have enough time to spend with her family. Meanwhile the Filipino nanny is working for her, practically raising her daughter, while she misses her own little boys at home in the philippines. I found both these women sympathetic. Less so the husband. The story about what happens to the young son of the nanny is horrific. I think the stories were a comment on life today and priorities, but I couldn't get the point about the husband. So he cheats with a young girl and gets away with it. Were we meant to pity him in some way? I certainly didn't! Overall a good movie which maybe I didn't quite get, but good acting and great soundtrack.

Fragmented, but coherent, Mammoth comparatively narrates domestic drama in different social-cultural settings. Heaving with stereotypes, Mammoth concluded in accomplishment of imparting a definite set of emotions with the audiences.

'Where do all the children play?' Disregard the film synopsis. These interwined stories, from varying cultural standpoints, confront and question post-modern values. The pursuit of money to better our lives and childrens' exacts a high price. Each character determines if the cost is worth it. This film's direction, symbolism and 'message' is far from subtle.

The film is gritty, with all the characters interrelated, yet somehow all unrelated. A thought provoking film from Lukas Moodysson in his first English piece as writer and director.