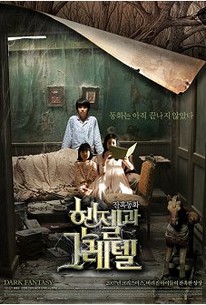 Hardly innovative, but effective and handsomely produced, Hansel & Gretel puts the "grim" in Grimm while placing South Korean director Yim Phil-sung on the shortlist of Pan's Labyrinth emulators to trust.

It is a film that is just good enough to keep you hanging around to the end, at which point you leave the theatre feeling vaguely let down.

It's inconsistent: too predictable and simplistic for adults, too disturbing and bloody for their offspring. It's hard to know who it's for.

The production design is terrific - the colour palette is as lurid as a plate of cupcakes. But the film loses its tension in a baggy final act that overexplains the secret of the house.

Revenge by abandoned children on the treachery of grown-ups ought to be unsetting at the very least, if not spine-tingingly terrifying. But it's done so clumsily that nothing remotely spooky emerges.

An original take on an age-old story, Hansel & Gretel is a small but powerful addition to the Eastern horror genre.

It's a very slow film, with a third act that might have benefitted from a little pruning, but it's worth the journey to understand the destination.

The story gets a bit convoluted as it rolls on, rushing through a few too many plot points and explanations, but slowly builds the layers of dread.

This is consummate filmmaking, where every frame beguiles and unnerves in equal measure.

Genuinely ghoulish and grim in the best Brothers Grimm tradition.

Making up for a selection of recent Asian Horror disappointments, this lush, surreal and brilliantly dark fairy tale is an entertaining and deliciously unsettling experience.

The director may unwisely opt for a lachrymose denouement that ruffles the carefully sustained mood, but this delightfully grim horror is worth seeking out - just follow the breadcrumb trail of positive reviews.

If you think for a second, Hansel & Gretel the Original"fairy" tale is not really friendly tale. It is creepy. A creepy version of Hansel & Gretel I thought there cannt be creepier than the tale itself. Just like I thought. Pretty well made

A creative piece and a sisister tale, that seems all the more creepy because of it?s fairy tale connection. Having said that it?s not scary or particularly graphic in terms of gore, but the childrens performances manage to pull off an intriguing story and one that?s worth seeing.

Hansel & Gretel may be an early film on Pil-Sung Yim's directing resume, but this Korean fantasy thriller shows he is no rookie at at this.

First things first. This is not a retelling of a fairy tale. This is a Korean thriller with concepts of the Hansel and Gretel story throw in. Hence, this is not a movie to take the kids to see.

This film doesn't waste time at getting into the fantasy atmosphere. Just after 5 minutes, with the opening credits already in the past, the main character is in the deep forest where 99% of this picture takes place. From here on out, with the run time at just under 2 hours, the bulk of this film is spent slowly unraveling the mystery.

Sure, the film is a bit long. However, at the same time there are positives that are beneficial to this movie. For one, the cinematography is worthy of note. The set designs, with the dark atmosphere and moderate amount of bright colors, are also visually pleasing.

Jeong-myeong Cheon is good as the lead, however it is the 3 children that steal the show: Shim Eun-kyung, Ji-hui Jin, and Eun Won-jae.

As this review comes to a close, Hansel & Gretel is a Korean thriller worth checking out for fans of the genre.

Smart and well told fable, with a very dark edge. The film do seems to take too much time to tell the story, and for some reasons kind of repeats itself towards the end. Still solid, a fine example of how you should tell a story involving kids. Korean cinema is certainly not dead at all, also, people refering this as some sort of Korean "Pan's Labyrinth" are seriously missing the point of this film, and big time.