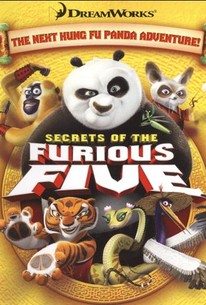 Join the star of Kung Fu Panda as he sets out on a whole new adventure in this sequel to the animated box-office hit featuring the voices of Jack Black and Dustin Hoffman. In the wake of defeating the ferocious Tai Lung, the Dragon Warrior must draw on the skills of Viper, Tigress, Monkey, Crane, and Mantis in order to face Shifu's greatest challenge to date. Along the way, Dragon Warrior uncovers the ancient Secrets of the Furious Five while discovering that it takes much more than strength and agility to become a true kung fu master.

Will Shadley
as Nerdy Bunny

There are no critic reviews yet for Kung Fu Panda: Secrets of the Furious Five. Keep checking Rotten Tomatoes for updates!

saw this movie when i bought the DVD. The original was great. But i would have liked the cut scenes to have had been the same 2d quality as the original opening. but it wasn't. not bad for kids though...

Of course, being a Kung Fu Panda fan, I would love this regardless of what anyone else would say. But its a great short animation, with Po taking on a new generation of students and teaching the basics with the anecdotes of the Furious Five. Not much to say, but great animation, a bit of humor, but its really aimed for the kiddies, but enjoyable an 25 mins.