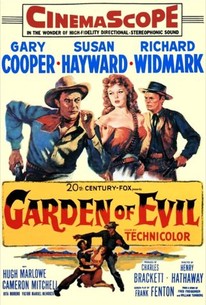 Gary Cooper, Richard Widmark and Cameron Mitchell portray three somewhat disreputable 19th-century soldiers of fortune, en route to California to prospect for gold. Stopping over in a tiny Mexican village, the three men are hired by Susan Hayward to rescue her husband, who is trapped in a gold mine in hostile Indian territory. The threesome agree to the expedition, their interest piqued by the possibility of picking up some gold themselves. During the harrowing journey, the party's already frayed nerves are aggravated when the men become attracted to Hayward. The group arrives at the mine's location--the Garden of Evil, so named because the Indians regard it as the domain of evil spirits. During the escape, Hayward's husband (Hugh Marlowe) is killed by the Indians, as is Mitchell. Cooper and Widmark play cards to decide who will take Hayward to safety and who will cover them while they flee. Cooper wins--but later discovers that Widmark had cheated in order to sacrifice himself. Garden of Evil takes too long to get to its climax, but the Cinemascope photography and Bernard Herrmann's rich musical score make the wait worthwhile.

Critic Reviews for Garden of Evil

Gary Cooper, Richard Widmark and Cameron Mitchell are variously noble, cynical and swinish companions to a lady-in-distress (Susan Hayward) in Mexico...pretentious, but passable.

I had a high old time, and so, no doubt, will you.

By surrendering to the tenants of traditional melodrama, anything Hathaway tries to say about the human condition feels either trite or under-developed.

The character dynamics are what make this tale interesting, and it's never hard to watch these A-listers in their patented roles -- Cooper as the voice of reason, Widmark full of wisecracks and wit, and Hayward exuding fiery independence.

Muddled, plodding Western that fails in its attempt to be profound.

Audience Reviews for Garden of Evil

Classic western tale of adventurers biting off more than they can chew. Some of the dialogues are a bit stilted by today's standards and there isn't much action to speak of before the really decent showdown. It's entirely driven by the characters and has some really pretty matte paintings and unusual filming locations to offer. Only the final message of greed = bad feels so much more forced than the film established earlier. It's also not particularly flattering in its Native American portrayal, but we're still talking about a 1950s Western here.