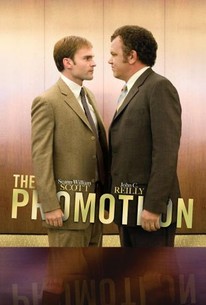 Critics Consensus: With a workplace-related theme worthy of satire, The Promotion features some sharp witticisms but ultimately disappoints.

Critics Consensus: With a workplace-related theme worthy of satire, The Promotion features some sharp witticisms but ultimately disappoints.

Critic Consensus: With a workplace-related theme worthy of satire, The Promotion features some sharp witticisms but ultimately disappoints.

A war of wills takes place between two men who want to run the same grocery store in this offbeat comedy from writer and director Steven Conrad. Doug (Seann William Scott) is a seemingly ordinary guy who works as the assistant manager of a supermarket near Chicago. When the owners of the market announce they're opening a new branch near Doug's neighborhood, he applies to become manager of the new store, and both he and his wife (Jenna Fischer) assume he's a shoo-in to get the job. But Richard (John C. Reilly), a gregarious recent hire at the store who has relocated to Illinois from Canada, announces he's also applying for the management position, and a keen rivalry develops between Doug and Richard even as they strive to act like friends on the surface. As the competition grows between the two, their personality flaws become increasingly evident -- Doug's short temper, Richard's history of drug abuse -- and when Richard's wife (Lili Taylor) leaves him, the contest starts taking an uncomfortable turn. The Promotion also stars Fred Armisen, Gil Bellows, and Bobby Cannavale. ~ Mark Deming, Rovi

Critic Reviews for The Promotion

The Promotion may not be much, and you get to know that supermarket uncomfortably well by the end of the 85 minutes. But as I say: He's an interesting writer.

By taking the time to make that connection with the audience, The Promotion ensures we'll forgive these guys anything -- and laugh along with them -- in their quest to advance their lots.

A nice little comedy about what it takes to climb the corporate ladder and the toll such actions take on the psyche of a decent individual.

The Promotion works as a comedy because, in the depths of our dark hearts, we enjoy seeing the woes that beset our comic antagonists.

This is one of the more original movies of the year, and it's the rare film that's primarily about the workplace.

The directorial debut of Pursuit of Happyness writer Steve Conrad, The Promotion carries a deadpan corporate-absurd whiff of Office Space but never quite scans.

Sort of a Dilbert riff, only lower on the food chain.

The Promotion does sacrifice some comedy in its attempt at depth.

...an odd yet compelling comedy...

A work-retreat sequence is hilarious, thanks to a scene-stealing supporting bit from Jason Bateman. And Reilly's convincing portrayal of the somewhat self-destructive Richard does make the whole thing watchable.

Two things are missing in this debut directing effort from writer Steve Conrad - a sufficient number of jokes and anybody worth rooting for.

Audience Reviews for The Promotion

I wanted this movie to be so much more than what it was. I felt like it was a wasted cast. It was a boring Step Brothers with out Will Ferrell. The whole movie is beyond frustrating, but it had a happy ending. I don't know. It was just okay.

not a really hilarious movie but it has funny parts and has a good story and is entertaining. B

Seann William Scott, John C. Reilly, Gil Bellows, Fred Armisen, Lili Taylor, Jenna Fischer , Nathan Adloff Doug and Richard, two assistant managers at a Chicago supermarket chain, battle for the same management position at a new store. Though the two seem to have nothing in common, their battle of wits and will teaches them that they are more alike than they had previously suspected. ~~~~~~~~~~~~~~~~~~~~~~~~~~~~~~~~~~~~~~~~~~~~~~~~~~~~~~~~~~~~~~ Kinda slow. But funny enough to keep you entertained. Plus you can kinda relate to the character's. Not a bad watch.

Good, light, funny movie, perfect for a quiet evening at home. I can see this is not rating too well, but I actually quite enjoyed it.