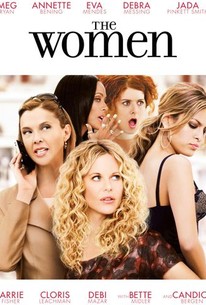 Critics Consensus: The Women is a toothless remake of the 1939 classic, lacking the charm, wit and compelling protagonists of the original.

Critics Consensus: The Women is a toothless remake of the 1939 classic, lacking the charm, wit and compelling protagonists of the original.

Critic Consensus: The Women is a toothless remake of the 1939 classic, lacking the charm, wit and compelling protagonists of the original.

Mary Haines is a clothing designer who seems to have it all--a beautiful country home, a rich financier husband, an adorable 11-year-old daughter and a part-time career creating designs for her father's venerable clothing company. Her best friend, Sylvie Fowler, leads another enviable life--a happily single editor of a prominent fashion magazine, a possessor of a huge closet of designer clothes and a revered arbiter of taste and style poised on New York's cutting edge. But when Mary's husband enters into an affair with Crystal Allen, a sultry "spritzer girl" lurking behind the Saks Fifth Avenue perfume counter, all hell breaks loose. Mary and Sylvie's relationship is tested to the breaking point while their tight-knit circle of friends, including mega-mommy Edie Cohen and author Alex Fisher, all start to question their own friendships and romantic relationships as well.

News & Interviews for The Women

View All The Women News

Critic Reviews for The Women

The classic 1939 film adaptation... worth seeing again and again. This is not.

I love women in real life but at the movies I hated The Women.

Actually quite an acceptable, enjoyable midrange chick flick that hasn't quite deserved the critical drubbing it has received in the States.

The funniest thing about The Women is that Mick Jagger is one of the producers. There was a knowing laugh in the theatre as his name sprang up in the opening credits -- our last chance to laugh, as it turned out, for the next two hours.

One of the worst movies I've ever seen.

In the end, English just wants to make a nice chick flick with some sassy lines. Genuine nastiness has been eliminated, while not-very-funny banter is retained.

[A] fresh, revitalized script that while it celebrates women, still contains no men, retains the core story of Mary Haines who discovers her husband is having an affair with perfume spritzer girl Crystal Allen, but has its own unique twist.

The problem isn't just the flat script by director and Murphy Brown creator Diane English. It's that this film's raison d'etre seems to be not to entertain, but to sell.

Despite its good intentions and high hopes, The Women is not a good movie. It does, though, have plenty of nifty slices.

The best fun in watching "The Women" is rating who still looks good and whose rose has faded (Carrie Fisher is almost unrecognizable), and ogling the frocks and heels.

Ryan, Bening, Pinkett Smith and Messing play an unlikely foursome of friends, whose origins are never explained, who have nothing in common and no chemistry to speak of.

The 1930s original feels more cutting-edge than this re-do.

Audience Reviews for The Women

Murphy Brown creator Diane English tried to get this film made for fifteen years. Many of the choices in casting were exceptional, especially Meg Ryan as Mary Haines, who was the perfect relatable woman done bad by her hubby. Eva Mendes is an effortlessly salacious vixen, as the revamped Crystal Allen, as well. Otherwise, many of the characters and complex plot points were completely changed, for the better. Sylvia Fowler (Bening) is no longer a chatty gossip with a penchant for ruining lives. Now she is the editor-in-chief of a fashion magazine, completely single and loving it, and motivated by ambition rather than petty jealousy. Debra Messing's character seems to be an amalgamation, who represents motherhood, fertility, and the complexities of the American family. Jada Pinkett Smith's character is also a blend of characters, a welcome change as she is also a strong lesbian character, which was only hinted at in the original. Of course, the Reno angle was scrapped, as we live in a world where divorces can be much simpler and reasonable. Instead of plotting and planning her imminent reconciliation with her husband, Mary changes herself and becomes a stronger and more thoughtful designer and mother. This is much better in comparison, because the film is no longer geared at the idea of having a man, getting a man, losing a man, or missing a man. Instead it is a film about how women can thrive and move forward, and the importance of female friendships. Of course, the problem with this change is that we have seen it before. (Sex and the City, Diary of a Mad Black Woman, Crazy, Stupid, Love, The Other Woman etc.) There's nothing new about the narrative of woman can do bad all by herself. Without the original's biting wit, sophistication, or the idea that cattiness and tearing down other women gets you what you want, this doesn't work. It's simply gimmicky and stale. It's understandable that English would try and remove the grotesquely backward thinking of the original and create a unique and thoughtful adaptation that would celebrate women instead of canonize men. A better way to accomplish this is to keep the gimmick but completely change the story. An even better accomplishment would be to create a woman driven story without drawing attention to the fact that she's a woman, which is what Murphy Brown did when it premiered twenty years before this film was released. As much as I would like to tout this film as a decent feminist adaptation of a work in the male gaze, I can't.

Cast: Meg Ryan, Eva Mendes, Debra Messing, Jada Pinkett Smith, Natasha Alam, Carrie Fisher, Candice Bergen, Bette Midler, Annette Bening Director: Diane English Summary: Shocked by the discovery that their pal Mary's (Meg Ryan) husband is having an affair with a beautiful young shop girl (Eva Mendes), a tight-knit circle of New York socialites comes up with a devious plan to help Mary win back her man. My Thoughts: "Great cast of female actresses. Some had strong performances some not as strong. But I enjoyed the story and the friendships between the girls. This is a girl driven film that I am not sure any guy will want to watch, unless forced to by their better half. But I must say, if I was to come face to face with my husbands mistress there would be little conversation happening. But I guess the way Mary Haines handles it is a bit more classy. I just don't have patience for talking when I see red lol. It's a funny film with strong females. Great chick flick."