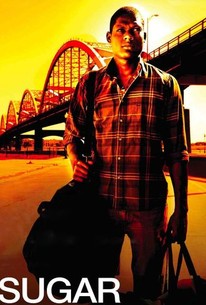 Filmmakers Ryan Fleck and Anna Boden (Half Nelson) weave this introspective sports drama concerning a talented Dominican baseball player who longs to break into the American big league and earn the money needed to support his impoverished family. Miguel Santos is a talented pitcher who might just have what it takes to earn a prized spot on a Major League Baseball team, but before that happens he'll have to prove his worth in the minor leagues. Advancing into the United States' minor league system at the tender age of 19, Miguel is warmly welcomed into the small-town Iowa home of his host family, but can't help but struggle with language and cultural barriers despite the kindness of strangers. Subsequently forced to reevaluate his life's ambition after his once-trusty arm becomes unreliable, the previously single-minded pitcher gradually begins to question both the world he lives in and the role he has chosen to play in it.

Letilier A. Foy Jr.
as Jaime

Sugar, a baseball movie, an immigrant parable and a thoroughly entertaining drama that accomplishes the seemingly impossible task of putting a fresh face on the fractured American Dream.

Not only have director-writers Anna Boden and Ryan Fleck crafted a poignant immigrant tale, they've made a sports saga rife with rare truths.

The camera is on Sugar the whole time, but the faux-documentary approach keeps him out of reach in all the ways that really matter.

To tell you what happens to him from here would be a tremendous disservice. We'll just say that, refreshingly, nothing about it is sickly sweet.

A rich and moving reminder of the way professional sports aspirations can shape someone's destiny in the real world.

This is a tragic sports movie that shies away from every element of tragedy.

A hopeful story, a heartwarming story, an entertaining story...

Writer-directors Anna Boden and Ryan Fleck could have created a cliché-ridden film...But the pair (who also made the teacher drama Half Nelson), are more concerned with humanism than proving that dreams do come true.

By refusing to "win one for the Gipper" or any of the other boring sporty standards, the directors have a lot to be proud of. By being a little bit bolder, however, they really could have hit it out of the park.

Sugar is one smart, beautiful movie, and from where I stand, it is an instant classic with the guts and integrity to remain focused on a winning story about a flowering American-immigrant soul.

Sugar is worth seeing not because it invalidates baseball's meritocracy, or because it makes us feel guilty for enjoying the national pastime, but because it shows us with empathy and insight how baseball players are more than what they do on the field.

A raw and insightful film that will appeal to viewers who may or may not be sports fans.

This was the follow up to Anna Boden and Ryan Fleck's surprise hit Half Nelson, and, like that one, this is a smart, heartfelt tale that has a great message, but is still entertaining without being overly preachy. The story concerns 19 year-old Miguel "Sugar" Santos, a talented pitcher from the Dominican Republic who dreams of getting sent to the U.S. to make it big in the major leagues. Before he can get that far though, he has to start lower, and his big dreams start off with him being sent through the ranks of the minor leagues, where he ends up in a small Iowa town. His experiecnes there, mostly involving his struggles with a foreign language and culture cause him to start reevaluating his life's ambition and make him question if he's really on the right path in life. This is a sports movie, but not in the typical sense. It's mostly a character study about the immigrant experience in the U.S., with a nice examination specifically of Latin American and Caribbean athletes and how they fit into the big picture. I originally thought this was a documentary, or perhaps a docudrama, but no, the specific story is entirely fictional, though it is heavily influenced by real life stories That I thought this was non-fiction is a testament to Boden and Fleck's knowledge of the subject, and the high leve lof authenticity and honesty on display in the film. They did their homework, and realy know their stuff, and the result is a wonderful look at both the immigrant experience, and the world of immigrants in the minor leagues. If I have to air complaints, then I'll point out that the film's overall pacing could have been perhaps a bit tighter, and how the third act overall seems to lose a lot of momentum I thought. It doesn't derail completely, but it does start to drag. Also, the way the flm was done just seemed really "typical" to me. There's no denying this is an indie film, and it seems like the film wants that fact to be known. Kidna got to me a bit, especially since Boden and Fleck's other two major films are like that as well (to varying degrees). All in all though, this is a really decent film. It's got some good performances, a great message, and is an insightful look into a neat subject.

This is not a sports film at all; Baseball is only the setting for a story of human experience. Sugar is a wonderfully crafted movie, a story of opportunity and adaptation made more effective through the perspective of an immigrant chasing his "one opportunity" for success. The journey is fascinating, the progress from a baseball academy in the D.R. to living with an Iowa family and finally living in New York surronded by others who had made the journey before. Sugar is a uniquely American story told in a refreshingly honest way.

a wonderful baseball movie that sits tragically as a hidden gem. the end of the film left too much uncertainty for a character that we came to care about, but the journey we travel to the point of being left wondering is a heartfelt and worth while journey. if you love baseball then watch this film, it leaves the normal cliches of overdone "feel good" sports films behind.

REVIEW
Filmed in quasi-documentary style, the film appears on the surface to be about the Latino dream of making it to the major leagues. Upon closer review, the family and friends of Sugar only ask "Are you going to the states?". The crux of the film lies not so much in the long odds of making it to the show, but moreso, simply escaping the homeland ... it's just that baseball is viewed as the quickest ticket out. The "Half Nelson" writer/director team of Anna Boden and Ryan Fleck score again with "Sugar". What really hit home with me was how many people miss out on their real chance because they just have a simple shortage of passion for their talent. When Sugar bashes the water cooler, it's not because he pitched poorly, but rather because he fears he will be shipped back home. There are many fine moments in this and the final act twist is not just terrific story telling, but fitting as well. It does what a final act should do ... connect the dots. Think back to the domino scene when one guy spouts that he once hit 98 in spring training. The recognition that he is back home playing dominoes is the real story. Good stuff. First time actor Algenis Perez Soto perfectly captures the charm and innocence of Sugar and finally the harsh reality of the situation. This is one to see.