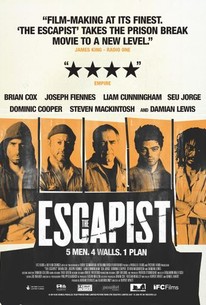 A career criminal seeks redemption for himself, his family, and his friends by busting out of a penitentiary in this intelligent thriller. Frank (Brian Cox) is a criminal who was forced to leave his wife and six-year-old daughter behind when he was sentenced to life in prison without parole. Frank openly acknowledges he was guilty and has made his peace with life behind bars, but when he learns that a drug overdose has left his daughter seriously ill, he feels a powerful need to reconnect with his family, and his only option is to escape. Knowing he can't do it alone, Frank assembles a team from various factions of the prison population, including Viv (Seu Jorge), who makes and deals drugs from his cell; Lenny (Joseph Fiennes), a wiry tough guy who doesn't speak if he can avoid it; and Lacey (Dominic Cooper), Frank's new cellmate who is a white-collar criminal not cut out for prison life. Frank soon realizes if his plan is to work, he'll have to bring aboard some of the more dangerous and unpredictable members of the prison's community, including vicious and corrupt brothers Rizza (Damian Lewis) and Tony (Steven Mackintosh). The Escapist was the first feature film from writer and director Rupert Wyatt. ~ Mark Deming, Rovi

News & Interviews for The Escapist

View All The Escapist News

Critic Reviews for The Escapist

I hate criticising someone for ambition but The Escapist is a victory of ambition over dramatic achievement.

The movie was written specifically for Brian Cox, and it's a great fit.

This is down and dirty and raw.

The splintered viewpoints help with the monotony, but from the taunting of new inmates to the cell-block sadist, we've gone through all this before, right down to the final twists.

Shapes a standard prison-break drama into a metaphysical study of freedom and reparation.

The Escapist is not an easy movie to watch.

Unfortunately, the depiction of prison life is predictable and the inmates are extremely dull stereotypes.

Prison drama breaks all the rules - and wins.

By keeping the focus on the humanity, Rupert Wyatt makes a strong debut as a writer/director here, and his film's got a great sense of low-budget style.

The two narrative tracks only really come together at the end, and meanwhile we have to work a bit too hard to keep track of it all.

A fractured, stylish and tense affair built around a band of great performances.

Audience Reviews for The Escapist

For those who have seen more than two or three prison break movies in their lives, this mediocre film won't offer anything new even if it believes to be doing something pretty smart and profound with an annoying flashback structure and a silly Ambrose Bierce twist in the end.

Set in a British prison, filled with all the usual convict suspects (including Damien Lewis and Steven Mackintosh woefully miscast as sadistic underlords!), this is unusual primarily for Brian Cox being the lead (which he fills capably), the setting, and the twist at the end (borrowed from a famous Ambrose Bierce tale). Nothing unusual then, but well done for the main part.

I just finished watching this movie, and I am amazed on how it turned out. It definitely went a direction that I didn't expect, and I really like that. Great bunch of actors. Very well put together. Definitely NOT boring, Good movie!