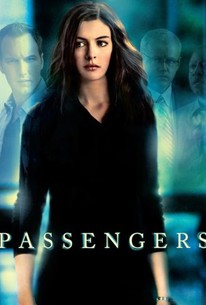 After a plane crash, a young therapist, Claire, is assigned by her mentor to counsel the flight's five survivors. When they share their recollections of the incident--which some say include an explosion that the airline claims never happened--Claire is intrigued by Eric, the most secretive of the passengers. Just as Claire's professional relationship with Eric--despite her better judgment--blossoms into a romance, the survivors begin to disappear mysteriously, one by one. Claire suspects that Eric may hold all the answers and becomes determined to uncover the truth, no matter the consequences.

William B. Davis
as Jack

It is dark, depressing and seems to be built entirely around a twist ending that feels less like a surprise and more like relief.

Even though Anne Hathaway is good, it's no reason to get really emotionally invested in her quest

Did Hathaway know when she signed to this that it would be released just in time to embarrass her during her accolades for Rachel Getting Married?

Passengers is a supernatural thriller so mechanically inept and lacking in suspense that it doesn't even pass muster as lowbrow Halloween-ready entertainment.

The surprise ending isn't as shocking as those of Jacob's Ladder or The Sixth Sense -- two stellar examples of the genre -- but it's still dramatically potent.

It's a long ride to a familiar destination.

Clever as it tries to be, the end really doesn't justify the means and Passengers becomes just another example of a big idea being reduced to cinematic sludge.

spends too much time concealing its secret to fully realize its potential as a human drama.

Initial intrigue turns into tedium and frustration as the plot heads into the territory of absurd.

It's a blurred pass at suspense and hesitant smooches, but with Hathaway and Wilson around to carry most of the workload, at least it's well acted.

Filmmakers have the power to change reality on us at their whim, but if they do so in ways that make us feel tricked and cheated, then this is an unforgiveable rip-off.

Uneven exposition just about murders this suspense piece (with a wee love story on the side) that seems to wait too long for a twist ending. Luckily the charisma of the leads carries the day until payoff time.

This movie was an okay movie, good cast and well acted, however it is rather slow and what saves this movie in order for me to say its a good movie is the ending! its a nice twist and quite a surprise so may be worth the watch!

So Bradley Cooper - I mean Patrick Wilson - is in everything. There's nothing wrong with any of the performances, including Wilson and Hathaway's. Morse is always great, the gentle, soulful giant that he is. But I have to agree with some of the critics who remark that the film seems like a distant, uninteresting mystery until the very end, when everything comes together ... and after a certain point, even that wasn't much of a surprise. Unlike other films with remarkable endings (I'm thinking specifically of Angel Heart), the payoff is not worth sitting through the rest of the journey.

I was not sure what i was watching early in this movie. A conspiracy movie or some thriller or what not . .then in came together in the last 40 minutes. Very much like the Others. A good movie but not great.