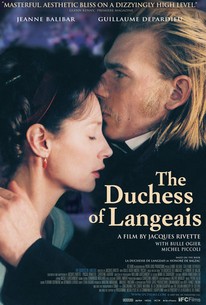 Critics Consensus: At times plodding and dialogue heavy, The Duchess of Langeais is nevertheless an intriguing and rewarding dissection of class and gender relations.

Critics Consensus: At times plodding and dialogue heavy, The Duchess of Langeais is nevertheless an intriguing and rewarding dissection of class and gender relations.

Critic Consensus: At times plodding and dialogue heavy, The Duchess of Langeais is nevertheless an intriguing and rewarding dissection of class and gender relations.

Guillaume Depardieu, Jeanne Balibar, and Michel Piccoli star in director Jacques Rivette's adaptation of the Balzac novella The Duchesse de Langeais, which tells the tale of a Parisian socialite who is romantically pursued by a Napoleonic war hero. The story begins as grieving French general Armand de Montriveau (Depardieu) arrives at a Majorcan church to speak with French nun Antionette le Langeais (Balibar). General de Montriveau believes le Langeais to be a woman he once loved dearly, but eventually lost. As the pair is reunited under the watchful eyes of the presiding priest and mother superior, their romantic past gradually comes into focus. It was five years ago that bored socialite Antoinette first became enamored with the wounded soldier whose rousing tales of adventure offered exciting contrast to her highly refined lifestyle. Though she was married at the time, the coquettish cosmopolitan quickly fell under the spell of the commanding military man -- who vowed that very night that Antoinette would be his lover. As their romance grows more complicated, the passionate pair finds it increasingly difficult to deny the powerful connection that binds them.

It's charged with nuance yet ultimately an exercise in compressed literary adaptation.

Maybe even Rivette himself is a little too delicate for this ferocious, intensely focused pair. But he's fascinated by them, and ultimately, he loves them.

The everyday moviegoer will find it as impenetrable as its heroine. But if you vibrate to nuances of style, if you enjoy tension gathering strength beneath terrible restraint, if you admire great acting, then you will.

The director guides the viewer through a sly consideration of near-sociopathic not-quite-lovers, one of whom finds refuge in religion, the other in romantic obsession.

It is the ultimate in movie as pane of glass, completely un-self-conscious of its own movieness but simply an intensely focused examination of human behavior on a narrative armature.

By offering such a faithful interpretation of an old-fashioned vision of love, "The Duchess of Langeais" challenges us to ponder whether our own relationships might not be equally tortured.

...the film's pinnacle example of masterful direction, as well as the abyss-like darkness of the story's creeping sense of the fruitlessness of romance, and possibly of life.

Visually arresting period drama finds the core of the emotional life of its characters in the debate between the duchess and the general about love. Balzac fans will delight.

The Duchess of Langeais is a romantic dance of death.

Of course, it would also help if we could understand what's supposed to be so alluring about the title character, Antoinette de Langeais.

Unfortunately this is the end for Guillaume Depardieu and it isn't as polished as other period pieces that I am more taken with.

[font=Century Gothic]In "The Duchess of Langeais," it is 1823 and Marquis de Montriveau(Guillaume Depardieu) finally locates Antoinette(Jeanne Balibar), the former Duchess of Langeais, in a convent in Cadiz. Five years previously, they meet at a salon given by Clara de Serizy(Anne Cantineau). At the time, he is a military hero who had been held captive in Africa for two years. And it may be for that reason that she is intrigued by him, even though he is something of a dullard. After their first evening together, she hands him an open invitation to return anytime. At which point, he is convinced that she will become his mistress.(There is a Duke of Langeais but he is never seen.)[/font] [font=Century Gothic][/font] [font=Century Gothic]"The Duchess of Langeais," a relatively brief film from Jacques Rivette, is a pointed look at the aristocracy, in its ascendancy following the fall of Napoleon. With little to do during the day, all they are left with to fill their time are social engagements and balls. And it may be for this very reason that Langeais leads along Montriveau. Remember, a duchess trumps a marquis and rank is everything. For the marquis, an imperialist officer, conquest is everything.[/font] [font=Century Gothic][/font] [font=Century Gothic]But the human element is missing. And I think that is definitely due to the performances which are key in any predominantly two person drama.(Remember "Gabrielle" and "Miss Julie"(1999) for instance.) Depardieu is satisfactory enough but Balibar is definitely lacking. Old pros like Michel Piccoli and Bulle Ogier show the youngsters how it is done.[/font]