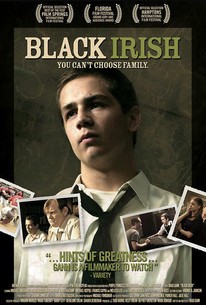 A young man struggles to grow up with principles as his family begins to self-destruct around him in this coming of age drama. Cole McKay (Michael Angarano) is a boy in his middle-teens growing up in an Irish-Catholic family in Boston. While Cole has dreams of playing major league baseball some day, his parents Desmond (Brendan Gleeson) and Margaret (Melissa Leo) are blind to his ambitions, and his older brother Terry (Tom Guiry) is a petty criminal who is unwittingly drawing Cole into his orbit. While Margaret is obsessed with projecting an image that the McKay family are happy and God-fearing folk, Desmond has been sinking deeper into depression ever since he lost his job, and his marriage is slowly but surely falling apart. The family's pride takes a body blow when Cole's teenage sister Kathleen (Emily Van Camp) discovers she's pregnant, but Cole decides it's time he took on some adult responsibilities, and gets himself a part-time job at a restaurant. Black Irish was the first directorial effort for screenwriter Brad Gann. ~ Mark Deming, Rovi

David Ian
as Priest
View All

Critical Consensus: Life Has Its Ups And Downs, Darjeeling Is Transporting

While the film has many well-observed moments...it ultimately suffers from its relentless piling on of crises.

Black Irish boasts many memorable scenes and fine characterizations but ultimately plays more like a series of snapshots come to life than as an organically satisfying story.

A small-bore Southie coming-of-age drama whose heart is just a bit bigger than its cliches.

Could almost be labeled a Gaelic minstrel show, so riddled is it with every conceivable cliché and stereotype ever associated with the sons of Eire.

It'll be worth watching to see if [director Brad Gann] plays to his strengths on future projects.

The problem with Black Irish is that, like those photos shifted to cover the holes, not everything is hanging in quite the right place here.

Gleeson inhabits the character in such a way that one cannot help but wonder how many Irish fathers like this he has personally known.

It's too sincere and thoughtful to be immediately dismissed. But it is terribly frustrating viewing: so much time and creative energy spent making a movie that, in one form or another, the audience has already seen.

A drismal drama rather reminiscent of Angela's Ashes, especially in terms of maintaining a relentlessly pessimistic and morose tone.

The difficulties of coming-of-age in an Irish-American family with a violent older brother and a self-destructive father.

Writer-director-producer Brad Gann's tale of growing up in blue-collar South Boston features a strong central performance, but it doesn't miss a cliche of hardscrabble adolescence.

This is not an original story, it seems that in recent years we have been flooded with stories that are very similar to this. It was very well done though, with an all-star cast, and a few twists in the story. Black Irish is another story about an Irish family living in Boston. Dad's an alcoholic, Mom is as strict as they come, the older brother is into crime, the older sister is facing a life changing decision, and Cole McKay (Michael Angarano) is stuck in the middle. The story chronicles a year in the life of the McKay family and features many changes that oddly happen all at once. The story wasn't anything special, but it was done in a way that wasn't as predictable as some of the other Boston family films, none of the characters are cops, and there is even some humor thrown in here and there. Being a lifelong baseball fan, that angle of Cole's life was the one I really related to and it helped the film to stand out even a little more. Oscar winner, Melissa Leo, does an amazing job and really puts the emotions into context. Everyone in the McKay family is a tough guy, they don't feel anything, and while she appears to be the strictest one of all, she's the one who really expresses the emotions that everyone must have felt. Angarano wasn't bad either, but I've seen him in things before and as usual, he lacks any kind of expression, he just always seems to go with the flow and do an adequate job, but nothing else. The big surprise of this film was seeing Tom Guiry, A.K.A. Smalls from the Sandlot as a tough, Boston-area, criminal. Seeing the sweet, innocent, kid I grew up know as Scotty Smalls, turn into a fowl mouthed, tough ass, drug dealer was pretty funny. Overall, Black Irish isn't a bad film, it's entertaining and it's unpredictable. There are a lot of different angles and the film moves quickly through the story, but the performances were a mixed bag, and a lot of aspects seemed to mirror similar films. If you don't watch a lot of movies, you'll love this film, but if you're a fanatic and you watch this, you'll probably be able to easily list a dozen films that are very similar.

Michael Angarano, Brendan Gleeson, Tom Gulry, Melissa Leo, Emily VanCamp, Michael Rispoli, Francis Capra DIRECTED BY BRAD GANN Wow. This movie was not at all what I was expecting. it was much better then what I had anticipated. I thought it was just going to be based around baseball and I was really wrong. Although baseball is always there, the story takes on much more. This is about a family that has had many misfortunes, two parents who are in a loveless marriage and who blame each other for their mishaps. An older son who is well on his way to being in and out of prison and who believes his parents don't care for him. A daughter being forced into doing what her mother believes is morally right even when her daughter doesn't agree with it. A younger son who is just desperately trying to connect with his father only to be shut down at every opportunity. Great performances all around, but Angarano and Guiry stand out for me in this movie, They really give there all in this film. It's at times funny, intense and heart breaking. Just really good and I hope more people see it.

Not as good as i thought it would be [based on the trailer] but it had some good performances. Tom Guiry was the highlight of the movie despite the fact that he for the most part he played a slightly subdued version of the character he played on the short-lived cult hit tv show The Black Donnellys.

Bravo! Loved it!!! Michael Angarano was great in here. This movie made me laugh and cry...lovely film.