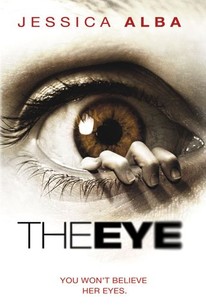 Critics Consensus: Featuring wooden performances and minimal scares, The Eye is another tedious remake of an Asian horror film.

Critics Consensus: Featuring wooden performances and minimal scares, The Eye is another tedious remake of an Asian horror film.

Critic Consensus: Featuring wooden performances and minimal scares, The Eye is another tedious remake of an Asian horror film.

The remake of the Hong Kong film "Jian Gui", a woman who receives an eye transplant that allows her to see into the supernatural world.

David Milchard
as Cafe Waiter No.1

Mike Elliott
as Driver at Border

Danielle Lozeau
as Teenage Girl on Bus
View All

News & Interviews for The Eye

View All The Eye News

Critic Reviews for The Eye

With every twist of the second-hand plot telegraphed far in advance, you don't need to be clairvoyant to see where this is going.

Effectively creepsome until it bogs down somewhat in plot explication.

One can't turn a blind eye to such conspicuous failings.

An effective if redundant fright flick.

When it comes to showing something to end the second-rate horror drought, The Eye is blind.

The major problem is the death of a horror film: It's startling, but not particularly scary.

Takes a B-minus import and turns it into a D-minus retread.

Brothers Danny and Oxide Pang's unnerving spook show from 2002 has been translated into a clunky, aimless interpretation that leaves you with just one overpowering thought: are Jessica Alba's lips for real?

Turns out seeing dead people can still be kind of a thrill.

Jessica Alba may be easy on the eyes, but a lack of dramatic heft makes her hard on The Eye.

It creates a good atmosphere, but no tension. The movie is just not memorable.

Audience Reviews for The Eye

The Eye remake is a pointless and unnecessary remake of Jian Gui. Jessica Alba delivers yet a bad performance here, and one that makes you ask the question, why is she even given roles in movies? She's a terrible actress, and in The Eye remake she is most certainly that. The Eye is a terrible film which like every other Asian remake suffers from lack of any real scares. The film is watered down and relies more on jump scares to create the tension, which doesn't work most of the time. The film is predictable. The original film is terrific, but this remake is totally unnecessary and is a waste of time. This remake suffers from everything that makes a remake uninteresting. The cast aren't good in their parts, and with a lead like Jessica Alba, you know that this film be terrible. The reason that most American remakes of Asian horror films fail is because they lack any real atmosphere or suspense. This is the case with this remake. I thought it lacked anything to make it watchable and memorable. This yet another remake that losses its horror qualities by cheapening the horror because it is predictable and poorly constructed to induce shock. If you want to watch something with genuine scares, watch the original film. This remake has cheap scares that don't stand out. This film is forgettable and is not worth your time.

I saw The Eye - not this one, but the Pang Brothers' Hong Kong original - about seven years ago when I was in my all things J-Horror phase, and while I found the concept rather unique, there were glaring flaws in the story and in the way the filmmakers decided to deliver their scares. The idea that a person who has been blind for her entire life can become so quickly dependent on her sight seems a little too convenient, and the incorporation of ideas that suggest organs contain parts of their original donors is a bit of a horror movie cliche. Also, the scare scenes are the typical boo-jump scares where everything is quiet and then the sound editors decide to racket the volume to ear piercing levels as the ghosts decide to make their presence known. In other words, the scares are predictable and only occasionally effective. Now the problem that I have with this remake is the same problem I have with every USA remake of some popular J-Horror (this is the generic term used to describe all Asian ghost horror movies): the only fear these remakes have been able to instill in their audiences is a fear of subtitles. They take the same film, reshoot it almost frame for frame with American actors and American settings. All of the plot elements, no matter how flawed, remain the same. And almost always, something gets lost in the translation. Usually it has something to do with the cultural context of the original; in fact, the whole long haired female ghost dressed in white is a criticism of suppressed gender roles among the female population in Asian societies, and that certainly never comes across in any of these USA remakes. Basically, the filmmakers call this being faithful to the original. But when the original sucks because of glaringly lazy writing and predictable scares, you would think that Hollywood studios would try to correct these mistakes. The subtitle fear comes with the assumption that audiences have not seen the original, and thus, an opportunity exists to make a better film. Unfortunately, Hollywood has opted out to seize this chance every time they remake a J-Horror, and this 2008 version of The Eye is no different. There's no need to watch this movie, because it's the same bad movie that the 2002 original was, except this one's got a bigger budget and Jessica Alba.

Some scary parts but not really the best film I've ever seen!

So from my experiences, the original versions of theses from Japan, China, or wherever are usually better. But I will give Jessica Alba props on this one. She convinced me on this one. This movie wasnt overly scary but did have several shiver moments for me. The goosebump types.