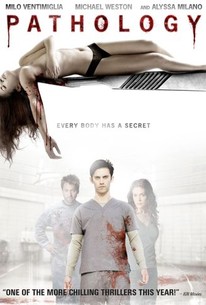 Milo Ventimiglia (of the blockbuster TV series Heroes), headlines this dark crime thriller, which marks the sophomore directorial outing of Marc Schoelermann, following the 2006 telemovie Hexxx. Ventimiglia portrays a young intern, newly arrived at the University Hospital in Philadelphia, who stumbles onto a psychopathic group of colleagues playing a vile game. They regularly select one of their members (on a rotational basis) to commit the "perfect murder," while the rest use forensic methods to try to determine exactly how the homicide was executed. Alyssa Milano (of TV's Who's the Boss? and Charmed) co-stars as Ventimiglia's fiancée, while thesps Johnny Whitworth and Lauren Lee Smith are among the perpetrators. Mark Neveldine and Brian Taylor (of Crank fame) scripted.

Gleefully brimming with body parts and bad behavior, Pathology is a fun piece of flamboyant tastelessness.

Like its characters, the pic is too clever for its own good, allowing the meticulously researched scenario to be undone by implausible behavior and gaping plot holes.

A particularly nasty slice of medical-themed horror, Marc Scholermann's film is the sort of thriller in which the tenderest scene depicts an autopsy.

Much like Crank, it's the guiltiest of guilty pleasures.

Even squeamish viewers are apt to be captivated by the tight, credible scripting; these 20-somethings talk and behave like today's irony-clad young sophisticates. And whatever your opinion of the subject matter, you can't fault the filmmaking.

...a sporadically compelling yet hopelessly inconsequential piece of work.

To put things into perspective, the campier "Saw" films are all better -- and more clever ...

Comes off as a semi-absurd variant of the horror mystique cheating the potentials of impeccable production values.

Existing somewhere in a world between Flatliners, Saw and Last Tango in Paris, this oversexed, over the top, underwritten medical horror flick won't come anywhere near the success of those films.

As dull as a conversation with a corpse.

It's as if [director] Schoelermann and screenwriters Mark Neveldine and Brian Taylor had more of a concept than a concrete idea.

Not exactly a great movie, but it's sick, slick, and strange enough to warrant a 90-minute look.

A pretty decent thriller if all a tad too obvious, not too mention just slightly bizarre?! Very gory, gruesome in places baring in mind the title. Ok for a watch once but far from great.

Bizarre. Bloody. Go in with low expectations, because this most definitely went for style, not substance.

A grim and morbidly twisted thriller about a group of medical students who partake in a sick game of "guess how they were killed" as each take turns to go out and murder a person in a complicated way to make it look like there was no foul play. It's gory and sexy but without being too sleazy so you can go onto this and watch in all seriousness and enjoy the ride. Not for the squeamish though.