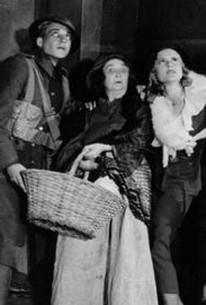 Mae Clarke had the best role of her career as the heroine of Waterloo Bridge, the first of three filmizations of Robert L. Sherwood's play. Douglass Montgomery (here credited as Kent Douglass) plays a young American soldier who, while on leave from World War I, meets Myra (Clarke) during an air raid in London and falls in love with her, unaware she is a prostitute. Directed with a delicate mixture of realism and impressionism by James Whale, the 1931 Waterloo Bridge is head and shoulders above its heavily laundered 1940 remake -- which in turn is vastly superior to the 1956 re-remake, Gaby.

Billy Bevan
as Soldier on the Make

Ruth Handforth
as Augusta, the Maid
View All

Features Mae Clarke in a truly great, heartbreaking, sympathetic performance for the ages.

Not the greatest film of the era ... contains a great deal of historical interest for film buffs

Clarke's memorable performance leaves us touched by her courage, pride and vulnerability.

This is one of those annoying romantic dramas where they go back and forth trying to figure out if they can make their relationship work, and it gets annoying. Plus the ending is sad and kind of made me mad about watching the movie. The movie wasn't that bad, though, the story was realistic and the actors were pretty good.

"Waterloo Bridge" is a tepid soap opera about Myra(Mae Clarke), a dancer who has fallen on tough times. It has been two years since she was in a show, three weeks since she paid her rent and she has turned to prostitution to make ends meet in World War I London. During one trip to solicit clientele, she helps an old woman(Rita Carlisle) retrieve her dropped potatoes during an air raid. They in turn are helped by Ray Cronin(Kent Douglass), a fellow American and a soldier on leave. Basically, the substance of the movie revolves around Myra wondering if she is good enough for him whereas the question should be if he actually loves her or is he just nice? Anyway, this sort of thing gets old quickly and there is little else to keep the viewer interested except for the sight of a pre-stardom Bette Davis.

this love story between a soldier and a prostitute was unseen for many years and it's not half as sappy as the vivien leigh remake. mae clarke is very affecting. also a small role for then unknown bette davis

a highly underrated james whale flick which surpasses the tear-jerker remake starring vivien leigh and robert taylor in the 40s. most audience who's fond of the taylor/leigh production would recall the sweetened tragic romance between a military prostitute and a naive young soldier: she's the chorus girl who meets a handsome officier during a bomb raid, then love at first sight then they get engaged. the officier departs then she receive the ill-fated news of his demise. to make a living, she degenerates into a prostitute then one day she remorsely discovers her one true love survives and ready to marry her...out of personal shame, she commits suicide by being run over by a truck, then he mourns for her in the rest of his life, chic flick, beautiful with all those talks of romantic idealism, right? huh? what about the 30s original? nothing like that sort!! our leading lady is from the wrong side of the track, doomed with her slum upbringing, she's a desceneded prostitute long before their encouter when she attempts to pick him up as a potential customer to pay for her debted rental. romantic? huh? then she falls for his boyish innocence, determinated not to ruin his life with deception of her disgraceful profession but she hides this fact with tormenting guilt. eventually our male protagonist acquires the truth of his lover, he still chooses to marry her come what may, stiffening his mind to rescue her with all his consuming passion. ironically our leading lady gets hit by a bomb right after she consents to be his spouse. how consoling. cynical to the top notch. audience wouldn't know if he should laugh or cry when it comes to the end. just chilling coldness strikes over the back of your mind. the 30s waterloo bridge is more of a psychological drama of conflicted characters bound by the circumstance of war and social level. somehow the spirit of our leading man might be more selflessly chivalric than the dashingly gorgeous robert taylor since he accepts her being whore without contempt but only compassion. our leading woman might not be as beautiful as the feline-eyed vivien leigh, but she demonstrates more of hellish agony to suffer and live with her tainted mark. leigh does a good acting job in warerloo as well, but her prostitute is more like a feminine masochist to accomplish the male ideal of love without the contamination of reality. if you're a cynicist with a sheer observant eye, you might enjoy the original waterloo bridge without the sparing mercy of idealized romanticism. mae clarke is notorious for being the woman who gets hit on face by james cagney with grapes in "public enemy"...maybe she deserves much better roles in her acting career.