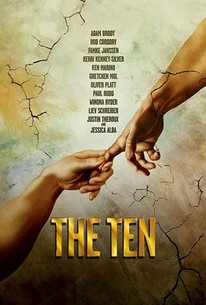 Critics Consensus: Although a few of the sketches that make up The Ten are humorous, the uneven and random tone of the film cause it to fall apart.

Critics Consensus: Although a few of the sketches that make up The Ten are humorous, the uneven and random tone of the film cause it to fall apart.

Critic Consensus: Although a few of the sketches that make up The Ten are humorous, the uneven and random tone of the film cause it to fall apart.

Composed of 10 vignettes, each one inspired by one of the Biblical commandments, "The Ten" is an irreverent but hilarious illustration of how bad behavior makes for good comedy. With each story told in a different style, but containing overlapping characters and themes, the film is a grand burlesque boasting an all-star cast that puts the sin back in cinema.

John Patrick Barry
as Himself

News & Interviews for The Ten

Bourne Is Certified Fresh; Hot Rod Hits the Skids; Bratz is Grade-Z; El Cantante Hits A Flat Note
Sundance News: "The Ten" And "King of California" Picked Up For Distribution

View All The Ten News

Critic Reviews for The Ten

...brings to mind the fondly remembered Kentucky Fried Movie/Amazon Women on the Moon anthos from the '70s and '80s.

Those worried about incurring God's wrath by seeing The Ten, don't concern yourselves -- by watching the film, you've suffered enough.

Thou shalt be funny. Thou, in this case, isn't.

By flaunting its own stupidity, The Ten practically dares you not to laugh at it, like a stand-up comic who sells an unfunny joke through the ferocity of his delivery.

Perhaps the Bible needs an 11th Commandment: Thou Shalt Not Bore. That might stem misfires such as The Ten.

If there were Ten Commandments for filmmaking, one would certainly be: Thou shalt not pass off sketch comedy as a feature film, especially when charging $9 a ticket.

More than simply unentertaining, The Ten comes from an America of silly, laddish self-regard and hollow protest.

The beyond-goofy collection of Commandment-inspired vignettes has funny moments, but it's a wildly uneven anthology, with three or four clunkers for every genuine chuckle.

Rudd, whose wry deadpan proved indispensable in Judd Apatow comedies like 'The 40 Year-Old Virgin' and 'Knocked Up,' is used here mostly as a straight man, the host in charge of introducing stories that drift along without any real destination.

A blasphemous parody so painful to sit through it seems designed by the Almighty as punishment for heathens and sinners.

Most of the segments are as clueless about their designated commandment as they are about what's supposed to be funny.

Some bits... are shockingly funny. Others, like the surgeon who causes a woman's death "as a goof," are just shocking without the funny.

Audience Reviews for The Ten

A series of ten short comedies each centered around one of the ten commandments (i.e., it's the DECALOGUE re-imagined by an alumnus of the sketch comedy series "Mad TV" and "The State.") Par for the anthology course, some are funny (the twins looking for their real father) and some are duds.

A certain critic described this movie as "The Best Comedy since Borat". I hardly agree. In fact, I would more likely argue The Ten to be one of the worst comedies I've ever seen, along with Epic Movie and Evan Almighty. Believe it or not, but I even think Evan Almighty was a little less bad, as it at least had respectable actors and a cool CGI flood in the end. Too bad it didn't sweep away this piece of trash in the process. I can't quite put my finger on it, but there was just something about the writing that felt very lame, childish and dumb. Maybe some people find it hilarious (after a lobotomy or two), but I certainly didn't. Sure, it was original in the sense that it comprised of ten small stories (based on the ten commandments), but the jokes weren't funny at all, so the only thing that kept it somewhat alive for me was the actual storytelling, which gave it a little merit entertainment-wise. But that's about the only positive thing I can say about this so-called comedy. I can't believe I sat through the whole thing. Avoid if you know what's best for you!

The Ten is a really crazy movie. It feels more like an Adult Swim live action show then a movie and should of just been fifteen minutes long. This movie has this random, hit or miss style of humor which truly buries itself in the ground. It consists of sketches based off the ten commandments and tries to be satirical, but ends up devoid of meaning. Overall, its just a stupid movie. I think Paul Rudd is awesome, but he just couldn't save this mess of a film.

Actually quite funny. Reminds me of a Woody Allen mixed with Monty Python and Apatow. A general surprise.