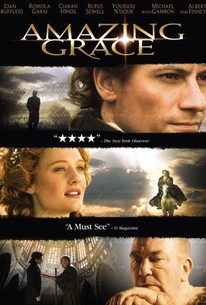 One man's role in the long battle to outlaw slavery in the United Kingdom sets the stage for this historical drama from director Michael Apted. In 1784, 21-year-old William Wilberforce (Ioan Gruffudd) was elected to the British House of Commons, and soon established himself as a politician with a conscience. Several years later, his close friend William Pitt (Benedict Cumberbatch) became prime minister, and together they made a bold plan to introduce a bill banning slavery before the English legislature. Wilberforce was aided by anti-slavery activists Olaudah Equiano (Youssou N'Dour) and Thomas Clarkson (Rufus Sewell); however, pro-slavery hard-liners Lord Tarleton (Ciarán Hinds) and the Duke of Clarence (Toby Jones) spearheaded a hard-fought opposition to the legislation, and despite Wilberforce's best efforts, his bill went down in defeat. In 1797, Wilberforce left politics due to poor health and a battered spirit; staying at the country home of his friends Henry and Marianne Thornton (Nicholas Farrell and Sylvestra Le Touzel), he became acquainted with Barbara Spooner (Romola Garai), a beautiful woman with progressive views. Spooner became deeply infatuated with Wilberforce, and she encouraged him not to give up on his noble goals; with her help, Wilberforce launched a second campaign to persuade England's lawmakers to end the slave trade. Amazing Grace made its North American premiere as the closing-night gala attraction at the 2006 Toronto Film Festival. ~ Mark Deming, Rovi

Toby Jones
as Duke of Clarence

Jeremy Swift
as Richard the Butler

Richard Ridings
as Speaker of the House

It's neither amazing nor graceful.

A decent cast under Michael Apted's direction does its best, but it's dull, naive and dramatically inert.

A good -- and important -- story, not always well told.

It is to be hoped that Amazing Grace is not the only, or the last, cinematic celebration of 200th anniversary of abolition, for there are more stories to tell, more imaginatively.

So much to admire and so little to amaze.

Alas, the subject matter is far more interesting than the execution... It's a film bogged down with staid dialogue that reeks of horse manure.

In a year that offers the occasion for a deeper and richer look at British slavery and abolition, it is a pity that artists of the caliber of Michael Apted and Steven Knight lent their talents to a tamely traditional and misleading film.

Amazing Grace proves to be an invaluable history lesson, but a rather boring film.

I'm not sure what was a bigger problem for me, though--that the story jumped around so much, or that the tone did, too.

There's a lot of good intentions behind Amazing Grace, but the movie's a bore, swirling into the minutia of antiquated British law.

This average biopic has the perfect material to be made into a quintessential modern classic, but it sadly lacks soul and intensity, resulting in a rather dull experience that doesn't quite live up to the importance of its real-life character.

Not as memorable as you'd think but a good film nonetheless. Full review later.

A chapter from history which is APTly supported by great performances from the actors involved, but not fluently adAPTed for the screen by Michael Apted.

A story that rightfully deserves recognition for it's place in history and opens the eyes of those who do not realise exactly what people went through during the slave trade years. Both storyline and cast were worthy enough in the making of a great film, however admittedly, I did find myself losing concentration in parts, despite the story being of great interest to me.