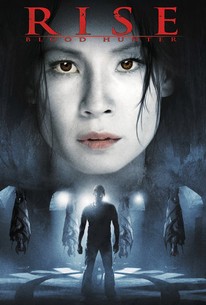 A woman who joins the undead against her will seeks vengeance against the ghouls who transformed her in this thriller. Sadie Blake (Lucy Liu) is a journalist who becomes acquainted with a group of beautiful but doomstruck partiers while following a story, led by the charismatic Bishop (James D'Arcy). While Sadie is taken with Bishop's good looks and sinister charm, she senses there's something dangerous about him, but it's not until she wakes up in the city morgue that she learns his secret -- Bishop is a vampire, and Sadie has joined his underlings as one of the undead. Angry and betrayed, Sadie is determined to stop Bishop and his compatriots, and she prowls the city with bow and arrow, ready to stake them from a distance when she spies them. Sadie finds an unlikely ally in her crusade in Detective Rawlins (Michael Chiklis), a police investigator whose daughter was transformed into a night creature by Bishop. However, Sadie is finding it increasingly difficult to resist her growing thirst for the blood of the living, becoming the sort of being she has grown to hate. Also featuring Carla Gugino, Robert Forster, and Nick Lachey, Rise: Blood Hunter received its world premiere with a special midnight screening at the 2007 Tribeca Film Festival.

India King
as Receptionist
View All

[Director] Gutierrez sustains a heightened mood of sex and violence that, without breaking new ground, entertains in the way Gothic flicks do: a combination of cheap thrills and a good old-fashioned crusade against evil.

You can thank a capable cast led by the estimable Lucy Liu, and work by writer/director Sebastian Gutierrez that succeeds in making the formulaic seem fresh.

Lucy Liu is always welcome on my screen, an actress who marries intelligence with feminine mystique, bundled with a dry wit and the ability to make action roles credible.

Torturous vampire bloodbath is a waste for all.

A tedious Blade rip-off. No suspense or scares, but lots of boredom.

While Rise: Blood Hunter isn't a terrible film, it's a predictable one.

...a far more effective piece of work than one might've expected...

It's a blood-red affair thrown together in a dash, a little number that will ultimately get the same kind of treatment from audiences as it did from those who made it: something you might cue up in the DVD player on a whim and forget just as easily.

A dry and dreary little affair, one that's almost shamefully beholden to B-flicks that are a lot more energetic and a lot less intent on being taken so seriously.

Rise is middling, but not by doing things the wrong way. It's not wild enough.

Mix Blade, a dash of Point Blank, and one of the worst movies you could imagine, and that's pretty close to capturing the experience of viewing Rise: Blood Hunter.

I'll be quite brief in this review for I feel that this movie fails to provide good scares and a good story. First off, Lucy Liu is plainly a bad actress. She can't act. This movie still proves that. I'd figured she'd retire after the lame Charlie's Angels movies. Anyways, getting back to this film, the movie is full of flaws, the dialogue between the characters is completely utter garbage and the plot borrows alot of from the Blade franchise, which in my opinion was terrible. On a high note on this film, Marilyn Manson makes a cameo as a bartender. Which I found was amusing to see. At least he was better than Lucy Liu, and he had less than 5 minutes on screen. I thought the movie was bad and with Lucy liu attempting the Buffy the vampire slayer routine; it just didn't work.

A reporter is turned into a vampire and she sets about tracking down and killing her attackers. The opening scene of this film is one of the lamest Playboy style pseudo-lesbian scenes I have ever seen in a "serious" film and that just about sets the level of the entire movie. It's basically just Lucy Liu and her cheekbones wandering around with a mindlessly disinterested look on her face, occasionally getting naked and dousing herself in fake blood. There is no action to speak of, the disjointed timeline is pointless and does nothing but mildly confuse in an attempt to make the plot look a lot more clever and complex than it actually is. The casting of Lucy and Robert Forster in a cameo are clearly a deliberate ploy to give this softcore TV movie standard bag of cliches a Tarantino flavour but its total lack of invention, humour or excitement make it a real chore to sit through. And any film that manages to make Lucy Liu in the nip seem like a bore is going SERIOUSLY wrong somewhere...

I watched this movie, but I don't remember ANYTHING from it other than I was thinking "well this isn't nearly as bad as most people claim it is". Available for free viewing at http://www.crackle.com/c/Rise_Blood_Hunter