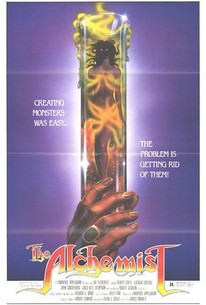 Charles Band directed this lacklustre fantasy about a man (Robert Ginty) cursed with immortality by an alchemist (Robert Glaudini) in the 1800s. The main story takes place in 1955, where the ageless Ginty is saddled with a 90-year-old daughter and meets the spirit of his wife reincarnated as a waitress (Lucinda Dooling). Eventually, the alchemist's curse results in the gates of Hell unleashing some unconvincing demons in a yawn-inducing finale. Filmed in 1980, The Alchemist was unreleased until 1985.

Critic Reviews for The Alchemist

There are no critic reviews yet for The Alchemist. Keep checking Rotten Tomatoes for updates!

Audience Reviews for The Alchemist

I'm surprised that no one else has written anything about this movie yet. It's really not that bad, it's not great either, though, it could use more work, but it's not bad. The story is about a woman who is traveling, and keeps having visions of a past life. She and her boyfriend meet up with these old people who recognize her from that past life. The troubling thing is that those people are really weird, from some sort of magical dimension, and they want to take her back there with them. Or something like that. The story could be a little more clear. The special effects were cool, though, and the actors weren't that bad.