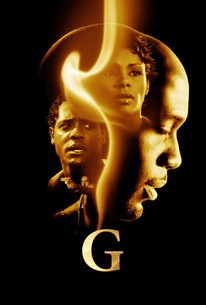 Critics Consensus: Race and class struggles come to the Hamptons in this reworking of The Great Gatsby with a hip-hop flavor. Unfortunately, too many subplots and a lack of believable characters spoil an otherwise novel concept.

Critics Consensus: Race and class struggles come to the Hamptons in this reworking of The Great Gatsby with a hip-hop flavor. Unfortunately, too many subplots and a lack of believable characters spoil an otherwise novel concept.

Critic Consensus: Race and class struggles come to the Hamptons in this reworking of The Great Gatsby with a hip-hop flavor. Unfortunately, too many subplots and a lack of believable characters spoil an otherwise novel concept.

Writer-director Christopher Scott Cherot (Hav Plenty) based his second feature, G, on F. Scott Fitzgerald's classic novel The Great Gatsby. Tre (Andre Royo), a writer for a music magazine, goes out to the Hamptons to interview a wealthy and mysterious rap mogul, Summer G (Richard T. Jones), who's recently bought a home there. Tre first stops in on his cousin Sky (Chenoa Maxwell, who also starred in Hav Plenty) and her control-freak millionaire husband, Chip (Blair Underwood). Tre soon learns that Chip is brazenly cheating on Sky, and he even witnesses Chip smack his girlfriend around. Tre doesn't have much luck getting close to Summer G, until the music impresario finds out that Tre is related to Sky, whom he dated in college. Summer G asks Tre to arrange a meeting with Sky, and Tre, apparently upset with the way Chip has been treating Sky, helps Summer G connect with his old flame. Summer G tells Sky that he still loves her, and she begins an affair with him. The snobby old-money Chip, already predisposed to dislike Summer G because of his hip-hop lifestyle, suspects that there's something going on, and plots to have Summer G chased from their exclusive Hamptons neighborhood. G was produced by Andrew Lauren, fashion designer Ralph Lauren's son, who also appears in the film as Adam Gordon, Summer G's manager. G was shown at the 2002 Tribeca Film Festival and at the 2002 Urbanworld Film Festival. ~ Josh Ralske, Rovi

Nicoye Banks
as B. Mo Smoov

Tara Ashley
as Girl Fan No. 1

No green light but the one mistakenly given to start production.

I still thought there were enough good performances, great visuals, and an interesting examination of a lifestyle in a way that we haven't seen a lot of times in movies for me to recommend it.

An unpolished but entertaining tragedy filled with outstanding performances and memorable moments.

You should never make a movie about boundless, conspicuous wealth on an indie budget.

We beat on, boats against the current, borne back ceaselessly into the sha-fizzle-dizzle.

"G" is a vacuous movie set in attractive locations.

The F. Scott Fitzgerald's classic, The Great Gatsby, adapted as a modern-day morality play in blackface. This fairly-faithful version explores the same themes as its source material, only with a hip-hop spin.

Reworking the story with a hip-hop record mogul at its center comes across as little more than a stunt. And not a very good stunt.

G often resembles a glossy BET soap opera...Cherot does capture the decadence of its slick "playas" in the extravagant world of bling-worshipping music moguls

Bottom line: It works even if you've never heard of F. Scott Fitzgerald. But it's twice as much fun if you have.

Everyone in this movie is getting it on with someone else behind their lover's back, but only the women have to end up suffering for it. Nice, right?

A pretty good drama. A lesson is taught about the consequences of dwelling on old flames from the past.