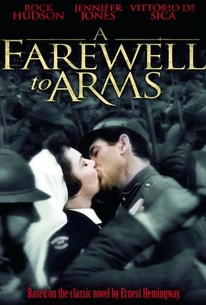 A Farewell To Arms Photos

Farewell to Arms is the second film version of Ernest Hemingway's World War One novel--and also the last film produced by David O. Selznick (Gone with the Wind). Rock Hudson plays an American serving in the Italian Army during the "War to End All Wars". Jennifer Jones is his lover, a Red cross nurse. They have a torrid affair, which results in Jones' pregnancy. As the months pass, Hudson and Jones lose contact with one another, and Jones believes that Hudson has forgotten her. But a battle-weary Hudson finally makes it to Switzerland, where Jones is hospitalized. The baby is stillborn, and Jones dies shortly afterward, murmuring that her death is "a dirty trick." Filmed on a simpler scale in 1932 (with Gary Cooper and Helen Hayes starring), A Farewell to Arms was blown all out of proportion to "epic" stature for the 1957 remake--so much so that its original director, John Huston, quit the film in disgust. Still, the basic love story is touchingly enacted by Rock Hudson and Jennifer Jones. ~ Hal Erickson, Rovi

Franco Mancinelli
as Captain at Outpost

Gisella Matthews
as Nurse in Catherine's Room
View All

Critic Reviews for A Farewell To Arms

What Hemingway wrote as an interlude of amorous flutes and distant drums, Producer David 0. Selznick has scored for brass.

Perhaps what is most irritating about the film is that too many times an exciting scene of Hemingway's is shucked out in favor of a distressingly inferior one invented (if I may indulge the Muse a moment) by Ben Hecht, who is responsible for the script.

Sweep and frankness alone don't make a great picture; and Farewell suffers from an overdose of both.

This film, for all its size and color, doesn't do much more by Hemingway's book than was done by the sentimental version of it played by Helen Hayes and Gary Cooper some twenty-five years ago.

A padded Ben Hecht script and Selznick's invariable tendency to overkill are equally to blame.

The exaggerated production values overrun everything, including director Charles Vidor, who hardly seems to know which way to turn.

This long and often boring tearjerker is a disappointing remake of a 1932 film based on Ernest Hemingway's novel.

This attempt to make the audience feel what the lovers were feeling failed because even to the least experienced in love it was plainly an artificial and external alteration.

An overblown Hollywood extravaganza that was universally condemned when first released and hasn't improved with age.

Selznick's last film as producer is a vastly disappointing remake of the superior 1932 version of Hemingway's novel, a sentimental, overblown production with stiff performances from Rock Hudson and Jennifer Jones.

One of David O. Selznick's many attempts to shape his lady-love Jennifer Jones' largely immutable mug into the face that launched a thousand cinematic ships.

We have David O. Selznick to blame for this bloated two-hour-plus Technicolor remake.

Audience Reviews for A Farewell To Arms

Just okay version of Hemingway story suffers from overlength although it has fine production values. Rock is pretty good in the lead. Jennifer Jones less so as Catherine, affected and rather bland.

A Farewell To Arms Quotes