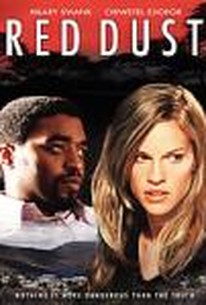 A dedicated human rights lawyer and a political activist who suffered at the hands of South African police officer with no regard for human life finds that the only thing more dangerous than standing up for your beliefs is the discovery of the truth in director Tom Hooper's adaptation of Gillian Slovo's captivating novel. Tortured at the hands of police officer Dirk Hendricks (Jamie Bartlett) for his efforts in seeking equality under the brutal apartheid regime, social activist Alex Mpondo (Chiwetel Ejiofor) is shocked upon learning that Officer Hendricks is now seeking amnesty for his violent deeds. When human rights lawyer Sarah Barcant (Hilary Swank) returns to her South African home to represent Alex, she quickly discovers that the deeper she delves into the past, the more she has to fear in the present. ~ Jason Buchanan, Rovi

Though Hooper falters on the side of manipulation, the story remains engrossing.

The subject matter is as divisive as racism, as provocative as the elusiveness of justice and as complex as human beings can be.

...never quite becomes as compelling or intriguing as we get the impression it's supposed to be.

Taking the form of a courtroom drama this film looks at the atrocities of the South African apartheid government and at the possibility of reconciliation.

This movie tackles a very difficult subject matter with a degree of compassion--Compassion that more whites should have demonstrated in this sad true tale about injustice, and brutality. It's a film about forgiving, even when vengeance is justified. Really well done...

A Great Movie, far more then I expected, about the best HBO Film I have seen. Hilary Swank has come a long way since Harry and the Henderson?s. Non US actors Jamie Bartlett and Ian Roberts added the gusto needed. This movie is about the apathy in South African. Chiwetel Ejiofor who plays Alex Mpondo a member of South Africa's Parliament, who was in prison and beaten and watched the brutal beating and murder of his friend Steve Sizela while being questioned. People who took part in this beating can obtain amnesty for acts of atrocity if they come forward and tell the whole truth. The music all during the movie is unforgetful. This story makes for a tear along the way. I went into this moving knowing nothing about its contents, picked it up in a pawn shop. Its another one of those unheard of greats. 4 1/2 stars.

My favourite film really really good and a great story its all about the apartied and its brilliant and it makes you aware of what was happening in that time with the south african's and the hardships they've been through its a really heart menacing film and completely worth a watch! Fantastic performances as well. its compelling intriguing and exciting with fantastic performances nd brilliant storyline that is great an well written! Hilary swnk returns t her home plac to help a south african convit his torturer! things arent simple though and gettng a conviction turnsout to be ard with burrued truths being opened and hiuring a good moviereall worth a wtch!

[font=Century Gothic]In "Red Dust", it is 2000 in South Africa when former state security agent, Dirk Hendricks(Jamie Bartlett), is set to testify before the Truth and Reconciliation Commission, seeking amnesty in the month-long torture of former ANC activist, Alex Mpondo(Chiwetel Ejiofor), which makes Hendricks' former boss, Piet Muller(Ian Roberts), nervous. Mpondo, now an ambitious politician, has reasons of his own to be concerned, as he searches for the fate of a friend, Steve Sizala, who was arrested at the same time. Representing Mpondo is Sarah Barcant(Hilary Swank), a New York prosecutor who is returning back to the South Africa village she used to call home.[/font] [font=Century Gothic][/font] [font=Century Gothic]"Red Dust" is a lumbering and simplistic take on what is apparently a very complex process. The Truth and Reconciliation Commission was set up to discover the truth behind Apartheid-era crimes by both blacks and whites and to head off the bloodletting that usually accompanies a radical change in government. In order to get former participants to testify, amnesty is promised in return. Yes, this does sound like an imperfect system but the alternative is far worse.("Battlestar Galactica" made a similar point recently.) Closure is not automatic in these hearings, as shown well in the excellent documentary "Long Night's Journey into Day". The commission will likely be an ongoing process, making it very hard to capture in a narrative film.[/font]