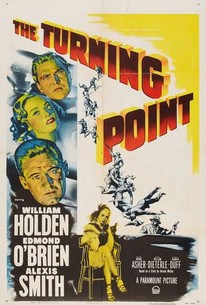 Edmond O'Brien stars as an idealistic state's attorney assigned to crack down on a crime syndicate. This proves more dangerous than first suspected, since the syndicate has a number of city officials in its pocket--including the father of one of the investigating committee's chairpersons. William Holden is the crusading newspaperman who attempts to help O'Brien, but even his efforts are compromised by deeply entrenched political corruption. The climax is staged at a crowded boxing arena, where Holden is struck down by an assassin's bullet intended for O'Brien. Inspired by the real-life Senate investigations of 1951, The Turning Point is neither a remake of a 1917 Paramount silent of the same name, nor was the 1977 ballet-oriented Turning Point a remake of the 1952 film.

Jay Adler
as Sammy
View All

Critic Reviews for The Turning Point

...a somewhat conventional but interesting crime drama. An exciting chase sequence and an unexpected ending are assets here.

A hard-boiled entertaining crime story that is skeptical if idealistic politicians alone can clean up the dirt in a big city.

Audience Reviews for The Turning Point

Solid crime drama with a better than usual part for Alexis Smith and good performances from the entire cast. Strong direction moves this along at an involving pace.