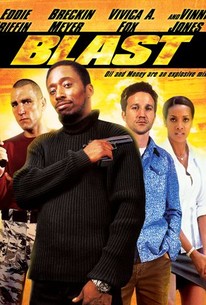 When a threatening gang of terrorists hijack an oil rig off the coast of California, it's up to a former Navy Seal to ensure that their deadly plan is thwarted in this explosive action entry from veteran genre specialist Anthony Hickox. When Lamont Dixon (Eddie Griffin) took a job as a tugboat captain, he thought his days as a fighting military man were behind him, but when an offshore drilling protest unexpectedly turns into a terrorist hijacking, Dixon must leap into action to save the entire state of California. As the hijackers reveal part of their scheme and Dixon begins to suspect that there is more to the elaborate plan then they let on, his only hope is to team with sexy FBI agent Lisa Reed (Vivica A. Fox) to coordinate a counterstrike from the shore and save the lives of both the hostages and thousands of unsuspecting citizens.

Vivica A. Fox
as Agent Reed

Brett Whitehead
as Uli
View All

If there's anyone that can pull of a Die Hard ripoff, it's Steven E. de Souza - the guy who wrote Die Hard...

Like most DTV efforts, this one's derivative, cheap, and instantly forgettable.

There are some good points and bad points to the movie. Good Points: 1. Good special effects 2. Great action scenes 3. Funny at times Bad Points: 1. Acting at some points isn't great 2. Tries to be like die hard 3. Eddie Grifin ain't an action man It is a very different film for Eddie griffin. Most of his film are comedy but to be honest action man is not his stile. He does do OK but not good enough. So if you are looking for the spectacular you are looking at the wrong film but if you want to just watch a action film watch it.