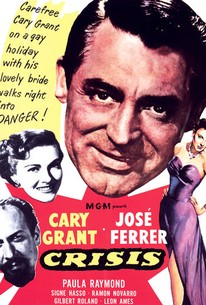 Cary Grant's utter credibility in the role of a brilliant, world-famous brain surgeon Dr. Eugene Norland Ferguson is the single element that keeps Crisis afloat. While vacationing in a politically unstable Latin American country, Ferguson and his wife, Helen (Paula Raymond), find themselves the unwilling house guests of dictator Raoul Farrago (José Ferrer). Suffering from a brain tumor, Farrago insists that Ferguson operate at once. The "crisis" of the title arises when revolutionary leader Gonzales (Gilbert Roland) demands that Farrago be killed on the operating table -- and kidnaps Dr. Ferguson's wife to bind the bargain. Unaware of his wife's plight, Ferguson proceeds with the operation, setting into motion a series of events leading to a grimly ironic denouement. Director Richard Brooks adapted the screenplay of Crisis from a story by George Tabori. ~ Hal Erickson, Rovi

Roque Ybarra
as Man in Car

Felipe Turich
as Man with Valise

Andy Carillo
as Man at Table

Robert Polo
as Man at Table

Jerry Riggio
as Man at Table

Melba Meredith
as Woman in Cafe

Sam Herrera
as Man at Door

Merrill McCormack
as Man with Scar

With such a penny-dreadful story, it is remarkable that Mr. Brooks has been able to get any substance of even passing consequences on the screen.

Brooks is adept at maintaining the tension.

A rather garrulous script does not prevent this from being, in the main, a competent and intelligent suspense story.

Slow-moving script is well-executed by cerebral director Brooks, and given vitality by Rozsa's atmospheric sound-tracking.

A heavy-handed and dour political melodrama.

There are no featured audience reviews yet. Click the link below to see what others say about Crisis!