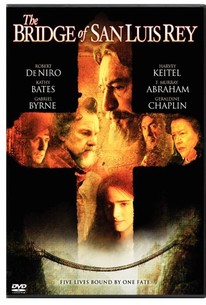 Critics Consensus: Despite an all-star cast and some impressive visuals, The Bridge of San Luis Rey is a lifeless, slow-going adaptation of Thornton Wilder's classic novel.

Critics Consensus: Despite an all-star cast and some impressive visuals, The Bridge of San Luis Rey is a lifeless, slow-going adaptation of Thornton Wilder's classic novel.

Critic Consensus: Despite an all-star cast and some impressive visuals, The Bridge of San Luis Rey is a lifeless, slow-going adaptation of Thornton Wilder's classic novel.

Thornton Wilder's award-winning novel is given a lavish screen adaptation in this historical drama from writer and director Mary McGuckian. In Peru in 1714, a rickety bridge collapsed as five people were attempting to cross, forcing them to plunge to their deaths. Brother Fray Juniper (Gabriel Byrne) is a Franciscan monk who has been given the duty of looking into the tragedy by the archbishop of Lima (Robert De Niro), and to learn what he can about the victims. It is Juniper's belief that these particular people died for some reason, and that it is his duty to determine why God chose these five people to perish, while others in the vicinity survived. After five years, Juniper delivers his findings to the archbishop as well as the viceroy of Peru (F. Murray Abraham), as Juniper tells them of the lives of the troubled Dona Maria (Kathy Bates), the nun Pepita (Adriana Dominguez), warm-hearted Uncle Pio (Harvey Keitel), street kid-turned-actress La Perichola (Pilar Lopez de Ayala), and others involved in the tragedy. The Bridge of San Luis Rey also features Geraldine Chaplin, John Lynch, and brothers Mark Polish and Michael Polish.

Kathy Bates
as The Marquesa

Geraldine Chaplin
as The Abbess

Dominique Pinon
as His Excellency's Fop

Jim Sheridan
as The King of Spain
View All

Critic Reviews for The Bridge of San Luis Rey

Why do good actors pop up in bad movies? More perplexingly, why do so many good actors end up in the same bad movie?

As a director, McGuckian is overwhelmed by the immensity of her cast, and her misguided attempt to make a Hollywood epic on a European production budget.

Best characterized as an honourable folly.

Audiences may wonder why a picture with Robert De Niro, Kathy Bates and Harvey Keitel would be so bereft of hype. After you've endured the film, all 120 airless minutes, you'll understand the rationale behind the quiet release.

An honorable but dull attempt to translate a neglected literary source to the screen.

How bad could a movie be that features talent as serious as Robert De Niro, Kathy Bates, Gabriel Byrne, Harvey Keitel, F. Murray Abraham and Geraldine Chaplin? That bad, alas.

The Bridge of San Luis Rey is a beautiful movie. The film's shooting locations are exquisite. The sets are stunning. The costumes are gorgeous. The actors are superlative. Too bad the movie sucks.

the worst film of the year... a fraud of the highest order

It is an intense philosophical undertaking that examines questions of faith, fate and chance.

Audience Reviews for The Bridge of San Luis Rey

A little long and a little boreing but good over all.

Eh, I wasn't really expecting anything as I watched this, and I'm glad I didn't. It was alright, but I was glad that De Niro and Keitel covered their accents (unlike what the synopsis says) so at least you could focus what was going on and not have a blaring reminder of who they really are. None of the characters really caused me to feel for them, and in fact it was the opposite. You actually end up disliking pretty much all of them, so when they die you don't really care. It had some pretty witty and heartfelt moments, but they weren't enough to save this boring movie. De Niro as the Archbishop was by far the most compelling performance, with an incensed religous yet arrogant ferver that was entertaining to watch. But other than that the other actors were fairly drab. Not the worst movie out there, but definitely not one of the best. It's sad to say but almost anything would be better to watch than this.