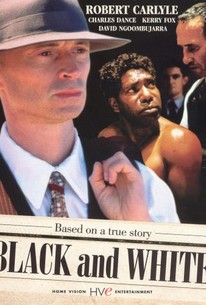 Directed by Craig Lahiff, Black and White is a story about bigotry, social injustice, and a real-life murder trial that made Australian headlines in the late '50s. On a December afternoon in 1958, the body of a nine-year-old white girl is discovered in a cave off the coast of Southern Australia. Detective Paul Turner (Roy Billing) quickly arrests a half-aboriginal fair-worker named Max Stuart (David Ngoombujarra), who signs a confession. However, being that Max is illiterate, the legitimacy of the confession is contested by his legal aid representatives, David O'Sullivan (Robert Carlyle) and Helen Devaney (Kerry Fox). Despite the questionable confession, Max is found guilty by the all-white, all-male jury, and sentenced to be hanged. O'Sullivan lodges a series of appeals, but no conclusive evidence of Max's guilt or innocence has been found to this day.

Critic Reviews for Black and White

finds just the right balance between scenes inside and outside the courtroom, and deftly juggles an unusually large number of characters without ever seeming cluttered.

Some fine performances, but the story lacks focus and spends too much time in the gray area.

Unlike the title, life is far from black and white, and this satisfying journey offers us a menu of many of its shades of grey.

Audience Reviews for Black and White

There are no featured audience reviews yet. Click the link below to see what others say about Black and White!