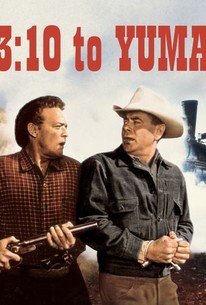 Desperate for money, frontier rancher Van Heflin holds outlaw Glenn Ford at gunpoint, intending to collect the $200 reward. While both men await the train to Yuma that will escort Ford to prison, the cagey outlaw offers Heflin $10,000 if he'll set Ford free. The rest of the film is a sweat-inducing cat-and-mouse game between captive and captor, interrupted with bursts of violence from both Ford's gang (commandeered by Richard Jaeckel) and the vacillating townsfolk.

Trailer Bulletin: Crowe vs. Bale in "3:10 to Yuma"
The Weekly Ketchup: Ed Norton As "Incredible Hulk," Ledger’s Scary Joker, Early Reactions to "Spider-Man 3," And More!
Crowe, Bale Get Company On "3:10 To Yuma"

Critic Reviews for 3:10 to Yuma

The compositions evoke a kind of open-air claustrophobia ...

A portrait of storytelling made for and by the Silent Generation, an audience all too familiar with the world's spooky, white-knuckled moral twilight.

That the climax fizzles must be laid on doorstep of Halsted Welles, who adapts Elmore Leonard's story quite well until that point.

This is a first-rate action picture -- a respectable second section to High Noon.

It's of necessity a talkative film, with Ford working on Heflin's nerves in a stream of Machiavellian banter, but one held in perfect balance by Daves, who keeps the tension strung taut.

Despite an abundance of talk, this 1957 film is often considered [Daves'] best.

It is hard to imagine a better Ben Wade than Glenn Ford.

Like The Gunfighter and Winchester '73, 3:10 to Yuma is one of those defining '50s Westerns that is well-known by film buffs but has never reached the familiarity level of a High Noon or Shane.

Distinguished by its thoughtfulness regarding the nature of Western heroism, as defined not only by dead-eye gunplay, but by family, community, and moral rectitude. [Criterion Blu-ray]

Daves isn't interested in cynicism. Redemption is probably too big a stretch as well, but there's plenty of room in-between.

The film is something of a classic and boasts a terrific ending.

Although not as nerve-wracking as High Noon, 3:10 to Yuma is even more claustrophobic… and the two-character drama is more intriguing than High Noon's protagonist standing alone.

Audience Reviews for 3:10 to Yuma

Interesting in that its so little thought of, this story has unseen depths for being "merely a Western", for instance, Glenn Ford's "bad guy" seems less than evil, simply a smarter-than-the-average-guy guy who's decided that the game is rigged and that he's not playing it. And Van Heflin's "good guy" seems mainly motivated by the fact that his wife has called him a coward. There's horse riding, gun fights, and most of the genre's calling cards, but it's these extras that give this story its unexpected legs.

Much more human than the remake, I thought, and to the good, it's 20 minutes shorter. I say it's a good thing because this is a movie based on an Elmore Leonard story. James Mangold, in his remake, would do well to take the author's advice and "leave out the parts readers [viewers] tend to skip." I found Van Heflin more intense and more desperate as Evans than Russell Crowe was, and in the role of Ben Wade, Glenn Ford had a bad guy charm that Christian Bale never quite pulled off... as much as I like Bale, he's not really a charmer: as Batman, his Bruce Wayne is off, and in American Psycho, a film I love, you realize rather quickly that Patrick Bateman can't even hope to hide his sociopathic leanings. But back to the film at hand: other than the fact that 2007 was its 50th anniversary, I really don't understand why this one was remade. It's tight and well-acted, and though not a perfect film, it tells a simple story well and is enjoyable because of it.

Near perfect psychological western. Great confrontational scenes between Van Heflin and Glenn Ford, and pure suspense from start to finish.

Daring for a 1957 western. Off-beat and interesting, worth a watch, even if you're not a fan of the genre.