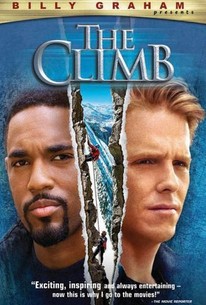 An action-filled adventure drama with conservative Christian overtones, The Climb (2002) tells the story of Derrick Williams (Without a Trace's Jason George) and Michael Harris (Apollo 13's Ned Vaughn), two professional mountain climbers constantly at each other's throats. The men push their lives to the edge -- and test one another's endurance -- when they decide to scale one of the highest peaks in the Chilean Andes. Executive produced by Barry Werner (of Billy Graham's World Wide Pictures) and directed by John Schmidt (Kevin Can Wait, Wait of the World), The Climb co-stars Dabney Coleman, Clifton Davis, and Todd Bridges.

Critic Reviews for The Climb

When most movies are selling it loud and fast, this one sneaks in a message that seems revolutionary for its quiet confidence that you can't make it to the top without something to believe in.

... offers a realistic view of the world that may surprise people who haven't seen a Christian film lately.

Thankfully this is a far cry from apocolyptic nonsense like Left Behind, and while the religion can get thick, it's not generally the focus of the film.

Audience Reviews for The Climb

There are no featured audience reviews yet. Click the link below to see what others say about The Climb!