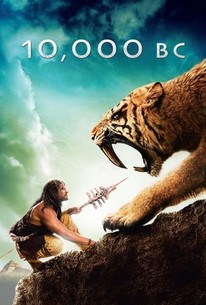 Critics Consensus: With attention strictly paid to style instead of substance, or historical accuracy, 10,000 B.C. is a visually impressive but narratively flimsy epic.

Critics Consensus: With attention strictly paid to style instead of substance, or historical accuracy, 10,000 B.C. is a visually impressive but narratively flimsy epic.

Critic Consensus: With attention strictly paid to style instead of substance, or historical accuracy, 10,000 B.C. is a visually impressive but narratively flimsy epic.

A young outcast from a primitive tribe is forced to defend his people from a brutal onslaught in Independence Day director Roland Emmerich's fast-paced period adventure. Despite the fact that he is low man on the totem pole in his tribe of fearless hunters, a brave young boy (Steven Strait) longs to win the heart of a beautiful princess (Camilla Belle) who is well above his station in life. When an overwhelming horde of powerful invaders forces the hunters into slavery and abducts the princess, the once-aimless boy suddenly finds his destiny taking an unexpected turn. Now, if he has any hope of saving his tribe from certain extinction, this young boy will have to fight for the future to his dying breath. ~ Jason Buchanan, Rovi

Joe Vaz
as Chief of Guards

Omar Sharif
as Narrator
View All

It's a horrible movie.

Roland Emmerich's prehistoric odyssey 10,000 BC is his silliest, most preposterous blockbuster to date. But it's lots of fun, too.

Roland Emmerich's great big CGI blockbuster lumbers along like one of the woolly mammoths that roam across the screen.

Don't expect Roland Emmerich's 10,000BC to make much sense, historically, geographically or logically.

Take the kids along; unless you want them to grow up to be palaeontologists.

Like the lumbering mammoths, it is plodding and dull.

Nothing more than a standard boy meets girl, boy loses girl, and boy becomes a man to save the girl, with the Geico cavemen thrown in.

It is inconceivable that filmmakers as experienced as Emmerich and his team didn't know they were making a bad movie.

A lousier adventure movie you won't find this year: 10,000 B.C. belongs, if not back in the stone age, then at least back in the mid '90s, where this sort of mindless, effects-driven drivel is best left.

All [Emmerich] cares about is not being boring. On that level, he succeeds.

One of the biggest problems with the film is the casting.

[img]http://images.rottentomatoes.com/images/user/icons/icon13.gif[/img] This continues Roland Emmerich's mission to go through every type of action movie and completely destroy the sub genre's reputation with arguably his worst film to date. One of the first being sci-fi thriller with Independence Day, followed by the disaster movie genre with The Day after Tommorow and then even worse with 2012, the monster movie with Eight Legged Freaks. His only remotely good film i've seen is his under rated Godzilla remake. Anyway, Roland Emmerich's next commercially sucessful but genuinely bad film in terms of anything else is here. 10000 BC has one of the most uninspired scripts ever written. Like Independence Day it is CGI overload with too much aggresiveness. In other words it's trying to make itself look better then it actually is. A terrible plot and no characterisation whatsoever 10000 BC is another big-scale marketing scheme for audience's that dont know any better.

If you're a 11 year old boy, you will probably love this movie. It has violence, special effects and a love intrest. That's all it takes to entertain 11 year old boys. However, if you are 13+ years old and have a brain, you'll probably end up hating it. The acting is really bad, the plot doesn't make sense, and it steals scenes from better movies like ALL THE TIME. Let me start of by saying, if you've seen Apocalypto, you've seen 10,000 B.C. Ancient man tries to save loved one from civilization who captured loved one. Take away the bloody violence, the Mayans and "Apocalypto"s shear emotion and meaningfulness and throw in Mammoths, violence and cave men and you've got 10,000 B.C. The whole film seems to be incredibly unoriginal. Guy is a loser. Guy becomes hero. Guy falls in love with girl. Girl gets captured. I bet you if I chose a random movie on Netflix, it would have the exact same plot. What's worse is, the plot isn't even fully explained, particularly in the kidnapping scene. Who are these kidnappers? Where do they come from? Also, why does it take like 2 days for the protagonists to make it from the snowy mountains to the jungle to the desert? Were they traveling in hyper speed? Oh wait, I forgot. This movie is not made for thinking. The character development in this movie is some of the worst I've seen in a VERY long time. The characters have no personality at the beginning of the film, and they have none at the end. The relationship between D'Leh and Evolet is very underdeveloped. Not only do they barely know each other yet they fall in love in like two seconds. On top of that, we get no back story on any character in the movie, making me not care about any of them. The acting in the film was awful as well. Steven Strait overacts and underacts, performing a down right awful performance comparable to Barry Pepper's performance in "Battlefield: Earth". Ben Badra was pretty bad too, downright awful, though I don't blame him considering most of his dialogue consists of grunts and random yells. The dialogue in this movie is awful. It sounds like it was written by an 8 year old with quotes like "Do not eat me when I set you free". It's comparable to any of the quotes in "Battlefield: Earth" or "Troll 2" (2 Battlefield Earth refrences. I thought we'd have more.) Imagine an entire script like the line you just read, and you've got this films dialogue. 10,000 B.C is watching a kid playing LEGOs with a large and expensive budget. It's an ugly, witless, bland film filled with cliches that blantantly rips off scenes from other films. (The spear throw= "The Scorpion King", e.t.c)If you still really want to see this movie, go watch "Apocalypto" while watching "Battlefield: Earth" while shaking your head.

I went in expecting less and a had a fun action packed ride. Was looking for a good fast action movie with nice effects and thats what I got.