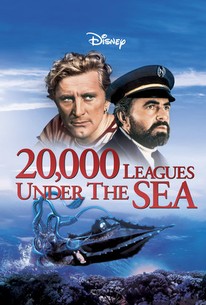 This 1954 Disney version of Jules Verne's 20,000 Leagues Under the Sea represented the studio's costliest and most elaborate American-filmed effort to date. Kirk Douglas plays a trouble-shooting 19th century seaman, trying to discover why so many whaling ships have been disappearing of late. Teaming with scientist Paul Lukas and diver Peter Lorre, Douglas sets sail to investigate--and is promptly captured by the megalomaniac Captain Nemo (James Mason), who skippers a lavish, scientifically advanced submarine. The film's special effects, including a giant squid, were impressive enough in 1954 to win an Academy Award. ~ Hal Erickson, Rovi

Herb Vigran
as Reporter
View All

News & Interviews for 20,000 Leagues Under The Sea

Critic Reviews for 20,000 Leagues Under The Sea

This is one of the great movie adventures, fully deserving its canonisation in Disney World.

As fabulous and fantastic as anything he has ever done in cartoons is Walt Disney's 'live action' movie made from Jules Verne's 20,000 Leagues Under the Sea.

The talky 20,000 Leagues probably won't thrill kids fresh from The Matrix, but they may be interested to know that the Verne film was the effects marvel of its day.

A good one that could have been better with a little less Kirk Douglas and more scientific things to gawk at in wonder.

Bring on the David Fincher-helmed remake.

A classic action-adventure for older kids.

James Mason's portrayal of Captain Nemo is a hard-edged, dramatic performance, with no winking nods or cartoonish layers. You could transport Mason whole into a much darker movie with R-rated violence, and he would fit like a glove.

A breathtaking piece of entertainment, 20,000 Leagues Under the Sea is amongst the finest live-action films to come out of Disney Studios.

Far superior to the majority of genre efforts from the period (or any period, for that matter), with production design and technical effects that have dated hardly at all.

One of the best Disney live action films and a classic fantasy-adventure.

Audience Reviews for 20,000 Leagues Under The Sea

Probably the best adaptation of Jules Verne's classic undersea tale ever made, with probably the best casting and performance of 'Captain Nemo' ever also. I can also go further and say this is probably the best live action Disney film ever as well, in the top five for sure. The plot is actually kinda loose really, there isn't really any definitive plan or agenda here, its merely Nemo cruising the ocean depths enjoying his freedom from civilisation. The main angle is Nemo used to be a prisoner on the island penal colony or 'Rura Penthe' (Star Trek!!) and managed to escape with fellow prisoners whom now make up his crew. Nemo thusly spends his time sinking ships that leave that island mainly because they carry arms and ammo for war. That's about it really, Nemo dislikes landlubbers, the people from this island oh and they killed his wife and child too when trying to unlock the secrets of his work. The only things I'm not sure of in this adaptation is where exactly does Nemo come from, where is this island suppose to be? why are there prisoners there? which wars does Nemo refer to?...the backstory isn't very clear. We know from the original novel that Nemo seems to be from India, the kingdom of Mysore, and his family were killed by the ruling British Empire. In this film Nemo is portrayed as a European which inturn renders the backstory a little off as we don't really find out what has happened to him previously, the film lacks proper explanation as I mention above. This is really the only downside to the whole film, everything else is reasonably accurate give or take, the finale has been changed. What's so enjoyable about this film are the visuals on display, the Nautilus design here is a piece of cinematic history. That strange pointed shell-like shape with fins, a big circular viewing window and that classic bug-eyed design for the main cockpit/helm section which breaks the waters surface. I loved the Nautilus and its interior (complete with spooky organ...essence of 'Phantom' much?) and I also always loved that steampunk-ish design for the deep sea diving suits (obviously unintended at the time). In fact everything to do with Nemo's craft, its interior and his equipment has that wonderful blend of Hammer horror and steampunk, right down to the muted dull colours and that heavy riveted steel appearance. Heck even the skiff has its own lovely design, the way it slotted into the Nautilus. Lets be honest here all the visuals on display throughout the film are gorgeous, even the models are well animated and nicely shot. Large scale sets and props look good, especially close ups of the Nautilus topside, she also looks great gliding through the murky depths and submerging...just like a sea monster. The main highlight of course must be the giant squid attack, everybody knows of this famous encounter surely. What amazed me is this sequence still holds up today! it looks great rubbery tentacles aside. The sight of that snapping maw as Nemo's crew battle the beast amidst a terrible sea storm is sheer joygasm from start to finish. Any monster fan will appreciate how awesome this sequence is, even the wide shots showing the entire squid latched onto the Nautiluses hull underwater looks great, no it doesn't look like 'Stingray'...not too much. Lastly how can I not mention the cast...oh my, you don't get line ups like this anymore. James Mason and his voice totally kill in this role, its one of the roles he is most fondly remembered for and rightly so. Personally I don't like how grumpy, stern and militaristic Nemo is portrayed here, whether that is Mason or from the novel I don't know but he always did intimidate me with his gruff demeanor, but that's good acting right there isn't it. Along for the ride is cocky sailor Kirk Douglas who again never really sat well with me here. I think he over acts and is too intense, I don't think he fit the role either with his American accent. Saying 'mate' or attempting to say it in an English regional accent doesn't quite cover it for me hehe. Lukas and his Eastern Euro accent, like Mason, is a joy to listen to, he makes the perfect upper class professor type (should of done more horror with his Vincent Price-like looks), whilst Lorre adds a touch of humour and his own quirky vocal tonnes. On the whole despite how epic this cast is I do believe most were miscast with the slight exception of Mason (even though Nemo isn't suppose to be European). I remember this fondly from my childhood and it still works well to this day, a few small minor gripes aside (and the miscasting) the film nigh on perfect. I only wish they could of included some stuff from the novel such as visiting the lost city of Atlantis and maybe a few more brushes with some creatures of the deep. A visual masterpiece in fantasy methinks, and considering this was made in 54 that ain't bad...James Mason + smoking jacket = awesomeness right there.

I love Douglas and I love Lorre, it's always cool to see actors you love, but this movie was also exciting and fun, I really liked it.

The ultimate Jules Verne experience. Everything from the film-making to the acting is perfect. It brings the very demented and fantastical elements of Verne's novel into reality. Kirk Douglas and James Mason are a great team and deliver some great dynamics. The story is not a word for word translation, but it captures the tone perfectly and I almost think it is the best it can possibly be on screen.

Disney`s version of 20,000 LEAGUES UNDER THE SEA is rightly remembered for the classic scene featuring the giant squid (which was an inspiration for Michael Crichton Sphere novel) , but it should be remembered for more than that . Captain Nemo is a wonderfully written anti-hero who`s what would be described nowadays as an environmentalist , but don`t dare confuse him with being some sort of yogurt knitting tree hugger because this is a man waging a violent crusade against warmongers and anyone else he sees fit to exterminate . It`s a really intriguing character study and Nemo is played superbly by James Mason . Compare Mason`s performance as Nemo to that of Steven Seagal`s role as ecowarrior Forrest Taft in ON DEADLY GROUND . Done so ? A laughable contrast isn`t it . Kirk Douglas may disappoint as Ned Land but his real function is to act as a physical square jawed hero alongside the academic and somewhat ambigious Professor Arronnax. I also appreciated the fact that Disney resisted the temptation to invent a child character in order to make the film appeal to children more by way of audience identification , nor is there any sort of mawkish sentiment or frivolity that`s spoiled many a Disney film . In fact this is such an exciting thoughtful adventure if it wasn`t for the presence of a seal I wouldn`t have believed it was a Disney film . Did I mention there`s a great battle with a giant squid ?