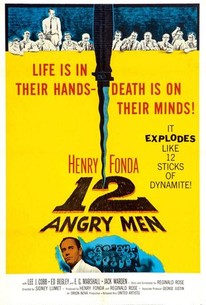 A Puerto Rican youth is on trial for murder, accused of knifing his father to death. The twelve jurors retire to the jury room, having been admonished that the defendant is innocent until proven guilty beyond a reasonable doubt. Eleven of the jurors vote for conviction, each for reasons of his own. The sole holdout is Juror #8, played by Henry Fonda. As Fonda persuades the weary jurors to re-examine the evidence, we learn the backstory of each man. Juror #3 (Lee J. Cobb), a bullying self-made man, has estranged himself from his own son. Juror #7 (Jack Warden) has an ingrained mistrust of foreigners; so, to a lesser extent, does Juror #6 (Edward Binns). Jurors #10 (Ed Begley) and #11 (George Voskovec), so certain of the infallibility of the Law, assume that if the boy was arrested, he must be guilty. Juror #4 (E.G. Marshall) is an advocate of dispassionate deductive reasoning. Juror #5 (Jack Klugman), like the defendant a product of "the streets," hopes that his guilty vote will distance himself from his past. Juror #12 (Robert Webber), an advertising man, doesn't understand anything that he can't package and market. And Jurors #1 (Martin Balsam), #2 (John Fiedler) and #9 (Joseph Sweeney), anxious not to make waves, "go with the flow." The excruciatingly hot day drags into an even hotter night; still, Fonda chips away at the guilty verdict, insisting that his fellow jurors bear in mind those words "reasonable doubt." A pet project of Henry Fonda's, Twelve Angry Men was his only foray into film production; the actor's partner in this venture was Reginald Rose, who wrote the 1954 television play on which the film was based. Carried over from the TV version was director Sidney Lumet, here making his feature-film debut. A flop when it first came out (surprisingly, since it cost almost nothing to make), Twelve Angry Men holds up beautifully when seen today. It was remade for television in 1997 by director William Friedkin with Jack Lemmon and George C. Scott. ~ Hal Erickson, Rovi

Martin Balsam
as Juror No. 1

John Fiedler
as Juror No. 2

Jack Klugman
as Juror No. 5

Edward Binns
as Juror No. 6

Jack Warden
as Juror No. 7

Henry Fonda
as Juror No. 8

Joseph Sweeney
as Juror No. 9

George Voskovec
as Juror No. 11

Robert Webber
as Juror No. 12

James A. Kelly
as Guard

John Savoca
as Defendant
View All

Too few films take on the art of arguing as a subject; we could certainly use more of them, but until then, Lumet's window into strained civic duty will continue to serve mightily.

The film leaves a tremendous impact.

Mechanically written, but within its own middlebrow limitations, it delivers the goods.

Although it may sound ungallant, these 12 Angry Men, are all right without distaff glamour. Their dramas are powerful and provocative enough to keep a viewer spellbound.

This is a film where tension comes from personality conflict, dialogue and body language, not action.

"12 Angry Men" puts the full range of human good and evil on display. It posits that, ultimately, the universe is benevolent, and our job, regarding each other, is to attempt with our best effort and greatest compassion to elucidate and clarify the truth.

One of Hollywood's more notable borrowings from television is this Reginald Rose drama about the soul-searchings of a murder-trial jury...

This movie is a masterpiece. That term gets thrown around a lot -- it's a very easy thing to say about great films like this -- but this movie is one of the best. This is one of the very few films that I will call perfect.

In the 60 years since its release, Sidney Lumet's masterpiece has lost none of its impact. In this age of unreason, 12 Angry Men remains sorely and urgently contemporary.

With each new viewing I come away feelings as if I have peeled away another layer on the characters and their buried motives.

Lumet in his first film records it as a meticulous laboratory experiment, a clammy orchestra

An impressive achievement considering it was Lumet's first film, extremely well-written and superbly directed, with many elegant shots, fluid camera movements and a gripping plot that takes place entirely inside a room and is sustained only by a tense, smart dialogue.

This classic is a scintillating courtroom drama with an excellent script and a brisk pace. It's all the more important considering it came just before the social upheaval in the 60's, when America began to reevaluate its prejudices.

Exceptionally acted and written, 12 Angry Men is a smart, thrilling classic that keeps the viewer hanging on to every word.

Juror #8: It's always difficult to keep personal prejudice out of a thing like this. And wherever you run into it, prejudice always obscures the truth. "It Explodes Like 12 Sticks of Dynamite" 12 Angry Men is a movie of no action, but loads of tension. It finds the tension in differences of opinion, how people were brought up and how they talk, act and think. This is Sidney Lumet's most revered and remembered film, and for good reason. It's one of those rare films that won't leave you, ever. It's powerful and extremely well directed, written and acted. An 18 year old slum kid is on trial for his life. He is accused of stabbing and killing his father. The 12 men of the jury retire to the jury room and take a vote. With the first vote, 11 of the jurors believe he is guilty and only one isn't sure; he votes not guilty. From there it's arguments and yelling, as Juror #8 tries to prove that you can't prove the boy killed his father. There's a lot of reasons why this film is so good, but the most obvious one to me, is how simple it happens to be. It's twelve men sitting and walking around a table. They're all different, and the actors who played them couldn't have done a better job. The standouts for me were, obviously, Henry Fonda(one of the best ever) as Juror #8 and Lee J. Cobb who plays Juror #3, and is the exact opposite of Fonda's character. It's easy to see why this is so often considered among people as one of the best films ever; definitely one of the best American films. 12 Angry Men is one that cannot and should not be missed by any film fan.