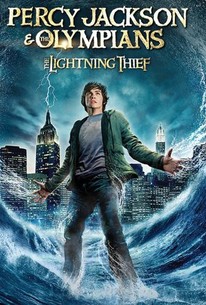 Critics Consensus: Though it may seem like just another Harry Potter knockoff, Percy Jackson benefits from a strong supporting cast, a speedy plot, and plenty of fun with Greek mythology.

Critics Consensus: Though it may seem like just another Harry Potter knockoff, Percy Jackson benefits from a strong supporting cast, a speedy plot, and plenty of fun with Greek mythology.

Critic Consensus: Though it may seem like just another Harry Potter knockoff, Percy Jackson benefits from a strong supporting cast, a speedy plot, and plenty of fun with Greek mythology.

A teenager discovers he's the descendant of a Greek god and sets out on an adventure to settle an on-going battle between the gods.

Suzanne Ristic
as Maid at Motel

Suzanna Ristic
as Maid at Motel

Loyd Bateman
as Son of Ares

Eli Zagoudakis
as Son of Ares

Matt Reimer
as Son of Ares

Rob Hayter
as Son of Ares

Lloyd Bateman
as Son of Ares

Shawn Beaton
as Son of Ares

News & Interviews for Percy Jackson & the Olympians: The Lightning Thief

View All Percy Jackson & the Olympians: The Lightning Thief News

Critic Reviews for Percy Jackson & the Olympians: The Lightning Thief

The Greek gods had outsized powers and petty grievances. These Gen-Y demigods are no different - it's a whole generation of kids with daddy issues

I thought it was mischievous and witty and amusing and I was just sort of drawn into it.

It's not enough to compensate for the computer-game-style plotting, which is largely based on us picking up narrative nuggets that mechanically slot into place later on.

Kids will love it, and adults may relish Pierce Brosnan's Centaur, and Steve Coogan as Hades - in his personal hell just under Hollywood.

A slab of market research in search of an actual movie.

The Lightning Thief is an admirable kid's fantasy.

As a former middle school teacher of gifted literature, I value all fairly well-made films for children and parents and this one is in that league.

The plot uses the presence of the Greek gods as an indistinct outline to influence teenagers who are more interested in the prestige and glamor of their connection than the responsibility that comes with it.

It provides a great adventure movie for the family audience.

Percy Jackson is simply uninspired in every single meaning of the word. It's probably the crassest, most obviously derivative work of this sort since Eragon.

Audience Reviews for Percy Jackson & the Olympians: The Lightning Thief

This enjoyable and harmless adventure directed by Chris Columbus is entertaining enough as it makes nice references to Greek Mythology gods and creatures, and it features a very amusing performance by Uma Thurman as the Medusa.

I had no idea there were so many kids books that could be made into films, they just keep popping up every year after Harry Potter opened the flood gates, and still none can compare to the kid with specs. This is close and probably the best rival yet but whilst watching I was still thinking of Potter, 'Clash of the Titans' and 'The Chronicles of Narnia', unfortunately for this film you just can't help but compare it to these films/stories and wonder if its just come along too late in the day. The film did get better as it went on but the acting is kinda average. Its a bit too silly in places with dumb lines, lame visual gags and apart from a great Hydra sequence the film is visually kinda average. The secret hidden camp where all the 'special' people train looks pathetic, like a Scout camp you would go to over the summer holidays, plus it only seemed about a 5min walk from a main road in the film? hardly well hidden. The best part as said was the Hydra attack, brilliant CGI with that sequence and really well played out, not really tense as you know no one will die (kids film!!) but its the best bit on offer, the rest ticks along steadily I guess. I'll say it again, the problem here is all the time your watching you can't help but think you've seen this all before. There's nothing new or special, its all been done now...quite a few times, so why make another film about the same kinda stuff?. Its never gonna beat Potter and this just seems rather repetitive I'm afraid. Shame because had it come out ten years ago it would of done much better I'm sure and not come across so stale. Hate to mention Harry flipping Potter so much but really...how can I not do? look at the title for pete's sake!. An awkward modern day setting for Greek mythology which works on some levels but fails on many others. The whole Medusa sequence with a dreadfully miscast Uma Thurman pretty much solidifies this if you ask me, the whole thing just doesn't feel right at all.

Harry Potter meets Clash of the Titans and this book translation does pretty good for itself. My daughter and I laughed cringed and enjoyed it all the way through. I then made sure to tell my daughter its a book and she is already to read it!